Posted on April 2, 2020 by gardenhomehistoryproject 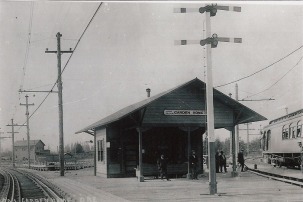 Because Garden Home was a junction point of two lines of the Oregon Electric Railway, Garden Home was a well known landmark across the Portland area. Oregon Electric service from Portland to Salem began service in January, 1908, and freight traffic in July, 1908. Passenger service to Forest Grove began in October, 1908. Passenger service continued until 1933, and freight service continued into the 1940s.

The Oregon Electric line ran seven miles from downtown Portland, through Multnomah Village, to Garden Home, where the tracks split. From Garden Home, one track continued west twenty one miles to Forest Grove, and the other track initially ran fifty miles south to Salem. In 1911, the line from Multnomah Village was upgraded from a single-track on a large trestle along today’s SW Maplewood Avenue to a double-track along today’s SW Multnomah Blvd, with several smaller trestles. By 1912, the southern line was extended all the way to Eugene, and 22 trains per day arrived into Garden Home from Multnomah Village.

The Oregon Electric line left south out of downtown Portland parallel to, but downhill from (east of), SW Barbur Blvd. Near Burlingame, it turned west into Multnomah. It swung south approaching SW Garden Home Rd, then to the northwest crossing today’s SW Multnomah Blvd at SW 45th, before making a sweeping arc along the path of today’s SW Maplewood Ave on a massive elevated trestle, before swinging onto the path of today’s SW Multnomah Blvd and into Garden Home. 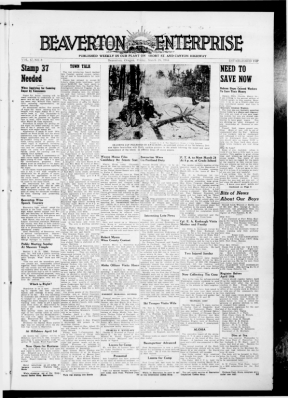 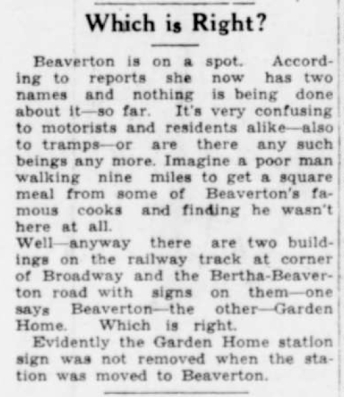 Plans to develop trains through Portland and down the valley began as early as 1904. Right of ways, labor issues, organization, finances, legal commitments and more required a several years of negotiating and planning. William Barstow is quoted in a letter to Abbot Mills: “On September 22, 1906, the Willamette Valley Traction Company sold to the Oregon Electric Railway its interest in a franchise granted by the City of Portland, passed by the City Council on May 23, 1906, and became effective without the signature of the mayor on June 5, 1906, and accepted by Willamette Valley Traction Company on July 2, 1906.” The Oregon Electric Barstow stop between SW 45th Ave and the Garden Home junction was named after William Barstow.

Subsequent negotiations planned how the train would traverse the city of Portland and extend west and south avoiding the West Hills, to continue a necessary elevation grade of less than 2% most of the way.

In January of 1908, W.S. Barstow & Company wrote that the line of 40.07 miles, extending from the City of Portland, Oregon to Salem, the Capital of the State, had been completed. Passenger service began in January 1908. The early construction included the huge wooden trestle with a single track that wound through Maplewood and onto the more modest trestle at the Garden Home junction. This Maplewood trestle was abandoned in 1914 for a double track system through Multnomah to Garden Home and finally the railroad bed became the Multnomah Boulevard in 1949. Garden Home Road was the main road between Multnomah and Garden Home until the conversion of the railroad track bed to Multnomah Boulevard. Patti Waitman-Ingebretsen recalls the Maplewood trestle in her story: Living on Maplewood Road 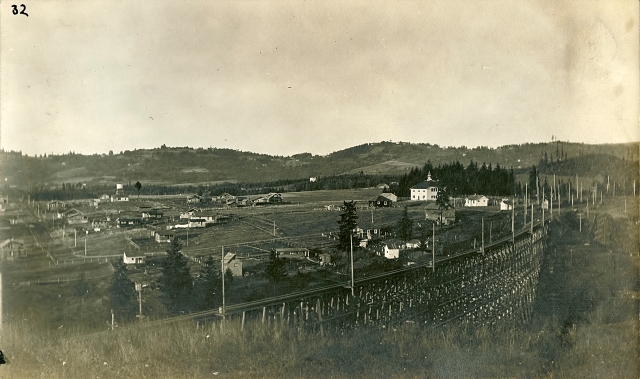 The rail line to the south that would eventually reach Eugene began in Garden Home to run south through what is now S.W. 71st and west diagonally to the Nesmith station at Oleson Road just north of Alden and then southeasterly to Metzger, Tigard, and south.

The western line went through Garden Home, crossed Oleson Road and continued west to Beaverton and Forest Grove. This allowed Aaron Frank to have a special siding to load his horses for shows in California and east to New York City. Members accessed the Portland Golf Club’s first building in 1914-1916, at Firlock Station which was at the northern end of Firlock, now S.W. 78th. Carlo Poutala lived on Firlock and developed Firlock paints in the 1940s.

“At its peak, there were 51 trains a day through Garden Home, twenty of them just to Garden Home. After leaving Garden Home the trains began to pick up speed exceeding 30 miles an hour. In 1908 there were 700 automobiles on the road in Oregon, increasing to 10,000 by 1912.” (from Lowell Swanson’s article, Winter of 2005 Newsletter, Multnomah Historical Association.)

James J. Hill, east coast railroad magnate, purchased the Oregon Electric line in 1910 and continued the construction, reaching Albany in 1910. Freight cars, sleeping cars, double tracks installed, and many other improvements were added. However, by 1920, Oregon Electric revenues declined with the reduction of passengers and freight due to the increase of paved highway development, competition with bus lines, motor cars and trucks. By 1930 there were just 15 trains a day out of Portland through Garden Home. Passenger service was discontinued in 1932.

In the 1930s the City of Portland wanted to build a new highway along the Willamette River, to be known as Harbor Drive and a new Farmer’s Market, thus eliminating the Oregon Electric service on Front Avenue. This began the closing of the train lines out to Garden Home and running trains to and from the south via Tigard, Garden Home, Beaverton and Cornelius Pass. The tracks from Portland to Greenburg and the Beaverton stub were removed on March 22, 1944 as was the line from Jefferson St. to Garden Home. The contract to pull up the rails and ties and develop Multnomah Boulevard was to be finished in 1949. Thus drawing to a close the railroad chapter of Garden Home history.

However, the railroad beds have forever marked the development of Garden Home. Once the rails and ties were pulled up, the western rail line became the “bridle path” for horse activities. The Fanno Creek Trail, now owned by the Tualatin Hills Park and Recreation District, was dedicated in 2001. The rail line to the south is marked by the Middlebrooks’ old railroad bed, the berm in some Alden and Mayo properties, and through the SW 82nd area past the site of the WWII fighter plane crash and south to Metzger.

Walter Grande’s book is the foremost authority on the early history of the Spokane, Portland & Seattle Railway and its subsidiaries, The Northwest’s Own Railway, Volume 2, published by Grande Press in Portland, Oregon in 1997, and served as the source for many of the facts in the above story.

Gerry Frank recalls how his father used the Oregon Electric to transport his horses by train:

My father, Aaron, bought the property because he wanted a place for his show horses. It was a perfect location since the land was adjacent to the Nicol Riding Academy and the Portland Hunt Club; and the Oregon Electric railroad came directly from Portland to Firlock Station where we could load and unload the horses from the estate.

There was a hobo camp in the woods just east of the railroad station towards Canby Street, near the four switch tracks so there was a lot of activity there. There would be 6 to 12 guys in there, riding the rails. Our parents cautioned us not to go down there but I never heard of any problems. One day when I came home from school for lunch, my mother had hired one of the men to spade the vegetable garden. When asked, I said I’d studied geography that day. The hobo said “You get your geography from a book; I get mine from the top of a boxcar.”

In the 1940s, passenger trains had been discontinued but steam trains continued to haul freight and logs. Bob witnessed a huge cloud of steam rise from the terrible train wreck at about SW 78th an area then called Firlock Station. The train was going east when it suddenly stopped. The track buckled causing the engine to roll over. That was the last train on that track. They took up the track some time afterwards. This was in the area of 78th which was then called Firlock Lane.

There were two derailments, one at the Firlock train station. (The Portland Golf Club calls this adjacent hole “Firlock Station” and mentions the train wreck on their website.) The tender was located ahead of the engine and got off track. Then the engine at the back kept on pushing the railcars zigzagging the cars off the tracks.

Once when I was about 4 years old, a steam engine derailed on the trestle east of the train station. They had to bring in a derrick and get the engine back on the tracks. Steam engines were used to haul the logs. It was believed that Southern Pacific owned the straight track from Tigard to Beaverton and they wanted too much money to use the tracks.  So the owner of the logs made a deal with Oregon Electric to run on their tracks to Garden Home and then switch and go on into Beaverton and out to Cornelius Pass through the tunnel in the west hills and supply the mills along the Willamette River. That’s why the log trains were coming through Garden Home. 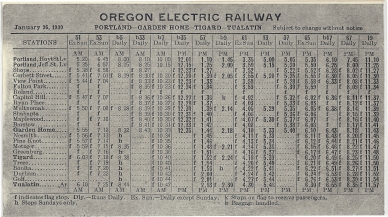 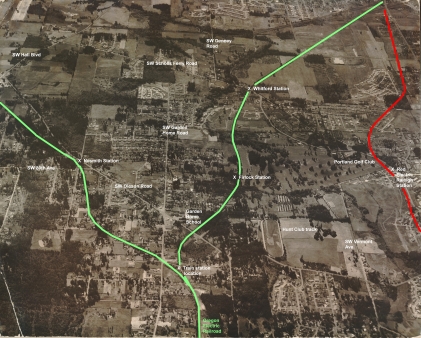 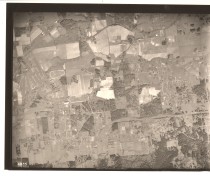 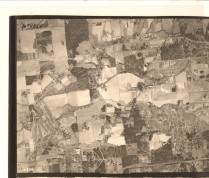 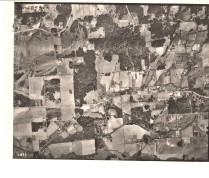 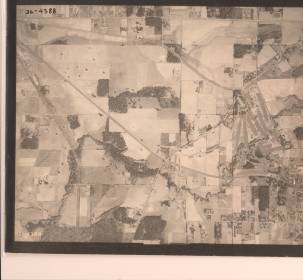 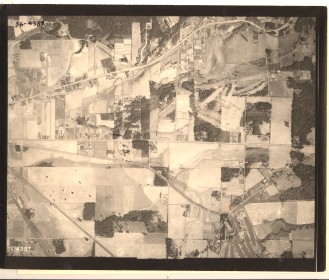 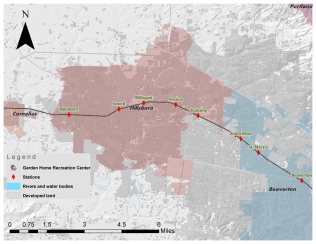 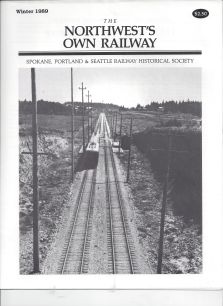 Like Loading...
This entry was posted in Early History, Places and tagged Oregon Electric, Red Electric, trains. Bookmark the permalink.

10 Responses to Garden Home Junction of the Oregon Electric Railway