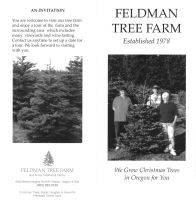 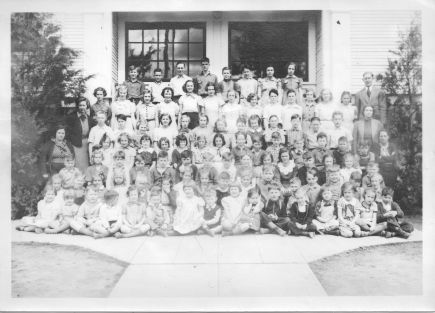 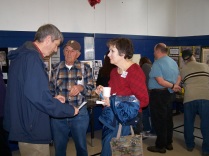 Back in the 1940s, you might have seen young Bob Feldman riding his bike home from Garden Home School precariously toting a pail of slop from the cafeteria to feed his new baby pigs. He sold his first set of 10 weiner pigs and hoped for a new business. “Weiner pigs” are sold young for pork. However, he and his family were shocked to find the second set of baby pigs dying from what was believed to be poisoned pig feed. It had been purchased from the feed store in Progress. That was the end of the pig plan.

Bob’s parents Harry T. (born July 5, 1900 at the family home in Garden Home) and Margaret Rose Mueller Feldman owned the Fanno Creek Dairy which was located on the north side of Garden Home Road between Sandberg’s property line to the east and 92nd to the west, and north beyond the railroad tracks (now Fanno Creek Trail). Walter Sandberg had about 2 acres at 8515 SW Garden Home Road.

The original Feldman home for the farm has been moved north and now resides at S.W. 8808 Rambler Lane with a plaque noting that it is on the National Historic Register. Bob’s father Harry was born and raised on this land. They farmed about 55 acres in this area and usually milked 24 to 30 Jersey cows in the 1930s and 40s. They also farmed several other smaller tracts in the area growing corn, hay and other crops.

The Feldman family had originally come from Germany. Bob’s grandparents Adam and Johanna Reidel Feldman bought this property in 1885 possibly from the Breck family and built the original house in 1898. Adam and Johanna Reidel raised three children: Harry (Bob’s father), Anthony and Mary. These three children are listed in the 1911 Garden Home School photo. Adam was a cabinet maker and his twin brother Henry a stone mason when they came to Garden Home. Henry took the train to Portland and worked on the first St. Vincent Hospital in N.W. Portland.

Bob’s parents, Harry and Margaret raised raised five boys: Harry Jr. born 1928, Lawrence, Robert (Bob) born 1932, Richard and Leo. When Bob’s grandparents deeded the property to their son Harry in the early 1920s, a Japanese family was raising strawberries on the property, possibly between the 1900s to 1920s.

Bob’s father Harry was raised in a German speaking household and could not speak English until he started school. He continued to enjoy speaking German to other German immigrants but did not teach it to his children. He was very concerned that they become “American” and show their patriotism.

During WWII, the family experienced animosity toward them as German immigrants. When possible they displayed their loyalty to our country such as hauling the papers in local paper drives during the war. During air raids, all the local homes were to cover all their windows so that no light would show. If there was a sliver of light, the local air raid Warden would come banging on their door in a way that they felt showed his prejudice to their German heritage.

After becoming the owner of the property in the 1920s, Harry started the Fanno Creek Dairy. Linn and Yolanda Nusser are the current owners of part of this property and still have the barn that was used for milking the Jersey cows by machine. This barn was built in about 1937 and had a cupola on the top, which Bob usually called a dog house. The rather low-roofed barn had room for the 24 cows, each one in their stanchion during the winter where they were fed and watered. Of course, the boys had to muck out the barn daily. This manure was then spread on nearby fields with one of the two teams of horses that they kept for chores that the tractor was unable to do. The barnyard also had another adjacent larger barn for storing hay and two silos for ground-up corn silage.

The farm had two wells, one near the farm house which was fronted by Garden Home Road; the second well served the barn operation and the cows from the 1920s to 1940s. This second well was put in in the 1930s to a depth of 155 feet (probably drilled by A.J. Jensen). They had a steam room to clean the bottles in the dairy’s “milk house” and the milk was loaded and capped into the bottles and cooled in a large cooler at the house. Milk that was gained from the evening milking was sold on their morning route. They delivered milk to the local Garden Home and Multnomah areas with their 1930 Chevy truck. Any excess milk was sold to the Red Rock Creamery in Tigard.

The dairy operation continued until 1947 when the land became more valuable for housing development. The farm was sold to a Mr. Bauman. The Feldman family then bought property in the Woodburn area.

Bob fondly remembers the family visiting the Oregon State Fair each year. His mother would pack up a big picnic in a basket and the family would all get into the milk delivery truck for the drive to Salem. He also recalls a Garden Home softball team that was developed in the summer. They had special T-shirts with “Lions” emblazoned on them. One time they were surprised to find they were paired against a team of adult men in Portland.

Many childhood memories include a friend, Doc Hickman, who spent a lot of time at the Feldman’s house. Doc’s name was Clark Warren Hickman but everyone including his mother called him Doc. Doc had a sister LuAnn and a brother Dick. Bob and Doc fished in Fanno Creek and played in a swimming hole called the Giles dam where the railroad crossed Fanno Creek. This wooden dam had been developed by Portland Golf Club to use the water for irrigation. The Soblisky dam was on Fanno Creek at Scholls Ferry. Bob and Doc continue to talk most every week after all these years.

Bob and his brother would hide in the bushes between the railroad and the 18th hole at the Portland Golf Club, hoping to find errant golf balls and sell them back to the players. During the war, the balls were precious and not available. Sometimes this became a process of actually taking balls that were in play but selling them back didn’t always work. One player who had his name on his balls confronted them and Bob and his brother dropped the balls and ran.

On a hot summer day, Bob and his brother decided to buy part of a wonderful “ice cream” melon, round and pink inside. These were being sold at the SW corner of the Progress intersection. They only had about 11 cents but the owner kept filling a gunny sack with melons. He told them he’d give them melons but would shoot them if they tried to steal them.

In the 1940s, passenger trains had been discontinued but steam trains continued to haul freight and logs. Bob witnessed a huge cloud of steam rise from the terrible train wreck at about SW 78th an area then called Firlock Station. The train was going east when it suddenly stopped. The track buckled causing the engine to roll over. That was the last train on that track. They took up the track some time afterwards. This was in the area of 78th which was then called Firlock Lane. There was a train station stop which was called Firlock Station. Mr. Poutala also lived on Firlock Lane and manufactured and sold paint which was labeled Firlock Paints.

Portland Golf Club has named their 15th hole “Firlock Station.” Their website identifies the history of the hole as “An entire engine and half the car turned over opposite the green in the mid-forties…This was the site of Firlock Station on the old Oregon Electric (train) – the only way to get to the Portland Golf Club prior to 1916.”

Bob remembers when the railroad crew was dismantling the railroad that ran along the current Fanno Creek trail. The Foreman asked Bob if he’d like to earn some money by taking a pail down to Fanno Creek for water. Bob was surprised to see the crew all drinking from the bucket, something locals would never do with the garbage dump, the sewage and farm manure feeding the creek.

Bob’s dad put indoor plumbing in the house in 1938, connected to a septic system. They had two wood stoves in the home, burning slab wood. On a very cold and windy day, the wood pile fell over breaking a gas pipe. His mother quickly opened the windows and got the children out until the gas company could come. The boys were sent next door to the Walter and Gerda Sandberg home for supper. Gerda brought out a jar of canned cherries and skimmed off the top layer of worms and dished up dessert.

The Sandberg home at 8515 Garden Home Road is thought to have been built in the late 1890s but Washington Co. has it at 1910. Bob thinks a Doctor built the house before the Sandberg’s bought it. Walter and Gerda Sandberg moved there in about 1919 and had a riotous gaggle of geese, ducks, rabbits, chickens, pigs and goats on their residential lot. The goat milk was sold. Walter Sandberg and his brothers Ed and Carl worked in maintenance at Portland Golf Club and would back their truck up to the kitchen to collect the slop for Walter’s pigs.

The Sandberg’s also raised guinea hens which would wander onto the Feldman’s adjoining property. The Feldman dog seemed to know the exact boundary line and would occasionally grab a guinea hen who crossed the line and bring her home. Bob’s mother would clean and cook it up and no comments were made. Walter (1890-1981) and Gerda A. Sandberg (1893-1965) are buried at Crescent Grove Cemetery near the flagpole along with Walter’s brothers Ed (1884-1952)and Carl (1886-1943).

Bob remembers the remnants of the “corduroy” road when Garden Home Road was paved. Logs were cut in half lengthwise and placed on the road bed to thwart the mud and pot holes. The logs were placed with the flat side up but still provided a very bumpy road.

Most of the boys worked in the summer. With the war on, men were not available to do the farm chores. A family who lived on Occidental (76th) had a son Howard Lindley who served in the marines on Guadalcanal in the Pacific. [Ed: Vlasta Becvar Barber also writes about Howard.]

Mrs. Cooper taught the eighth grade at Garden Home and was Principal for a short time. During school time, she apparently had a stroke and fell to the floor. Bob’s brother yelled that she was dying and the school called the ambulance. Then amazingly, the ambulance had a bad wreck on the way to the hospital. These events are remembered long after the math and geography. Mrs. Cooper followed Nels Anderson and Mr. Taggert and served as Principal before Wayne Thurman.

In the 1930s, the log cabin at 8550 SW Garden Home Road was called the Hamilton place although Mr. Hamilton was commonly called “Snoose.” He was a very large man and a musician playing the accordion and other instruments. Bob thinks that a Brown family owned the land before that.

Bob left school at age 16 to work logging in the woods. He served in the Air Force. He became a licensed machinist and worked at NW Marine Iron Works until 1966 when they bought the timbered property in Eola.