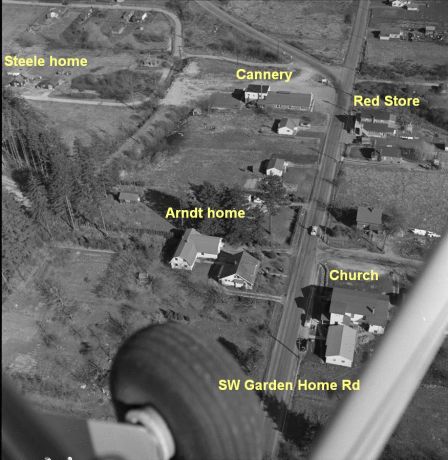 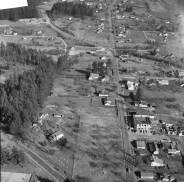 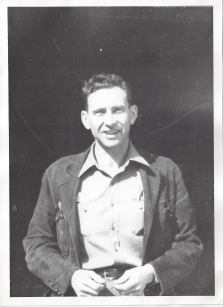 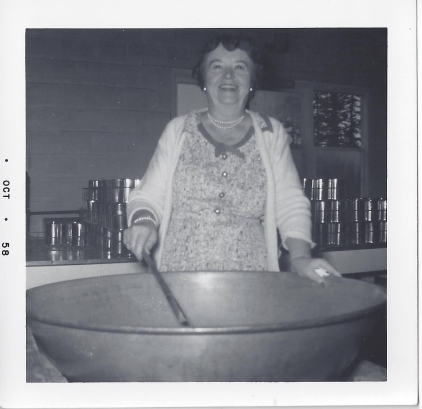 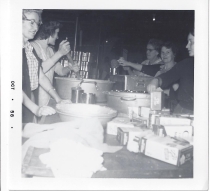 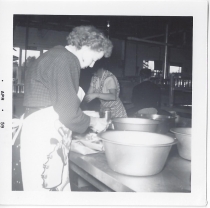 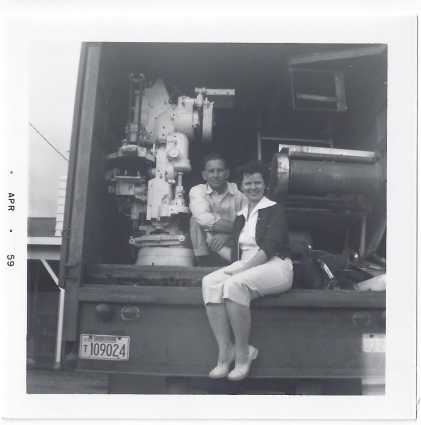 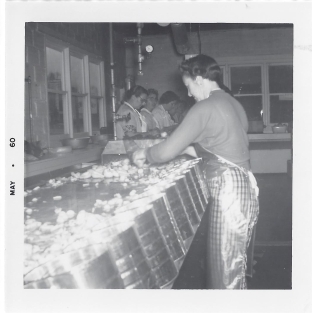 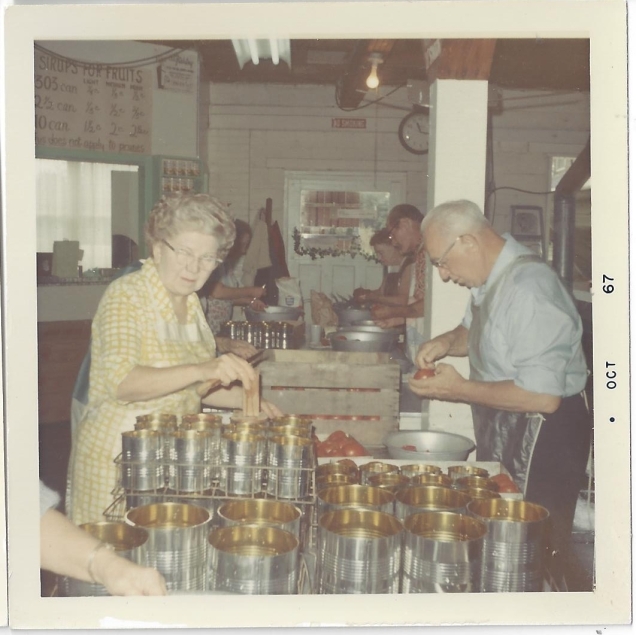 The “Helping Hands Circle” ladies from the Community Church made daily sandwiches to sell at the cannery to raise funds for a new church organ.

Whitney’s Cannery – Helping Hands Circle 1964 – Lois Day is second in back row, Isolda Steele is far right front row in black and white dress. Ruth Liscum is in the back row, in the middle, wearing blue. 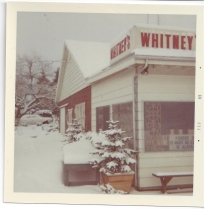 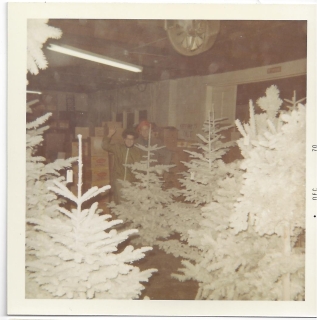 What came after Whitney’s Cannery 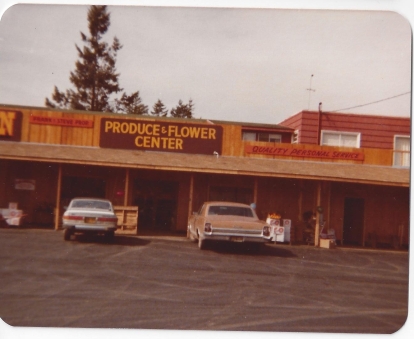 Old Market Pub at the location of the old cannery

The following is from a phone interview with Leona in March 2010.

Before coming to Oregon, Leona and Mark Whitney were living in Las Vegas.  Mark was working for the Union Pacific Railroad on the Streamliner, but the older son developed allergies and the family felt it would be better to move to another climate.  With this in mind Mark made a trip to Portland and was able to get a job with Portland General Electric. During this time he made a friend who worked for the American Can Company who had heard about a small cannery in Garden Home that was up for sale. This was 1950. He told Mark, “You may never get rich owning the cannery but you can make a good living at it.” Mark and Leona visited the Cannery and bought it not knowing much of anything about the business. Leona said she had to learn fast!

The Cannery was located on the north side of Garden Home Road at the junction with Multnomah Boulevard. The building subsequently housed Frank Comella’s fruit and vegetables, a forerunner of the current farmers’ markets. Old Market Pub is now in this location, a portion of which is the original cannery building.

Aside from canning fruits and vegetables that were brought into the cannery, The Whitneys began selling preserves under their own label. It happened this way. Mark had picked up a load of apricots from The Dalles which looked pretty good as he examined the top layers of the boxes. But once back in Garden Home and getting a better look at them he discovered the lower layers in the boxes were all overripe. Needing to do something with the fruit and do it quickly before the apricots spoiled, Leona made up batches of apricot and pineapple preserves, which turned out to be a hit with the locals. They used the smallest cans they had on hand, those usually used for canning fish, and sold the jam for 19 cents a can. Consequently, what might have been a business setback became an opportunity. 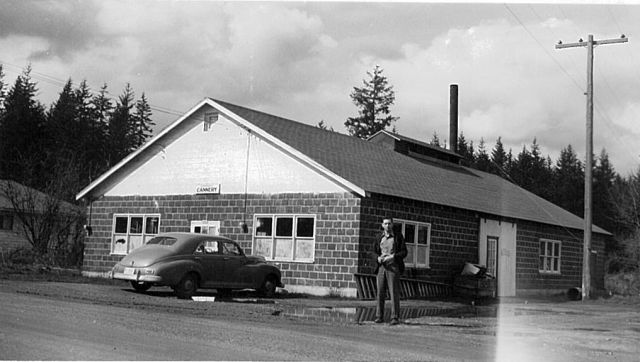 The Whitneys expanded that line of the business, canning every kind of fruit jam and selling it in gallon cans. The local schools operated their own cafeterias at that time and the Whitney Cannery built their year-round trade on providing canned jams and fruits to the schools.

Leona kept the books and was in charge of the payroll. Anywhere from eighteen to twenty women were hired to work full-time during the busiest periods. During peak canning time, late summer through fall, the employees worked nights canning the Whitney’s fruit while those in the area who wished to have their own produce canned were accommodated during the day. Produce would be brought in the morning and run through the canning process. Applesauce was made by first cleaning the apples, then steaming them in a 40-gallon vat and then putting them through a strainer. At this point, the owner of the apples could choose to add spices or flavoring as they wished. The applesauce was then placed in the cans, sealed and stamped with the owners stamp. Individuals were asked to pick up the canned items before closing that day otherwise they were taken to the warehouse and charged extra to keep until picked up. The warehouse was small so space was limited and rather than pay the extra cost for storage most people picked up their canning the same day.

Mark was in charge of just about everything including selling the canned goods to the schools during the winter months. But Leona admits that they all did a little of everything and there was seldom any down time for the family. This meant that the Whitney boys, Doug and Richard, who were still in school at this time also worked in the Cannery. Their job was to manage the warehouse where they did a lot of lifting and carrying!

The women in Garden Home that Leona knew best were those such as Mildred Stevens and Lois Day and Mrs. Singletary who worked in the cannery. Working gave her little time to engage in community activities but she did belong to the Garden Home Community Church’s “Helping Hands” committee, which is how sandwiches came to be sold at the Cannery. 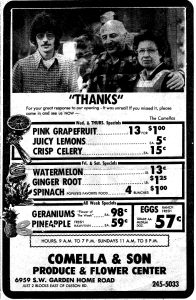 Needing to raise money to buy a new organ for the church the group came up with the idea of selling sandwiches at the cannery. The Whitneys agreed. The “Helping Hands” women then began taking turns making 10 or 12 sandwiches each day and taking them to the cannery to be sold. And the idea caught on. Locals who came thinking they would be able to finish with their canning by lunch only to find they were running late provided a ready market for the project. The sandwich sales continued until enough were sold to pay for the new organ.

The Whitney family operated the Cannery for 26 years quitting business in 1976. The building was sold to Frank Comella, who operated a fruit stand there for many years. The building now houses the “OLD MARKET BREW PUB.” When I asked Leona why they sold the cannery she said, “Well, I guess we were just tired. It was a lot of work.”  Which I somehow felt, in listening to her, was an understatement. Leona now lives in Nevada with her son.

This unique Garden Home attraction was featured in an April 28, 1972 article in the Oregonian by Andrew Mershon.  The Whitney’s cannery, purchased in 1950, and plant nursery was located at the junction of Multnomah Blvd. and Garden Home Road.   As the article says (and is still true today): Mrs. Whitney has seen many accidents over the years. “Slow Down! You’re Making Me Nervous,” her chalkboard read one morning.  Next day, she followed the stick with a carrot, “You’re doing much better.  Thanks!”

People honked and waved as they drove by.  Salesman would try to sell Mrs. Whitney a modern reader board but she liked the charm of the simple old chalkboard. No one ever bothered the board.  She used quotes or commentaries on the weather, the traffic or current events.  “Caution, pheasants crossing” alerted the traffic and then followed by “Joggers crossing” for a group of neighborhood men.

Mrs. Whitney tried to put a different message on each side of the board in the early days but she was horrified to watch people crane their necks while driving to read both sides of the board.  For safety, she began putting the same message on both sides.  She felt that the chalkboard brought in lots of new customers.

Click here for more stories about the Old Cannery