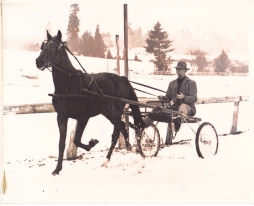 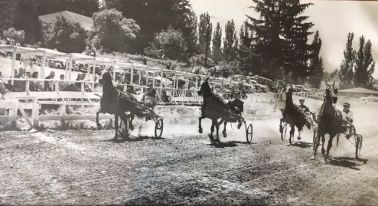 Buggy races at the Hunt Club

Two riding academies and one hunt club were located just north of the Aaron Frank property, all on land east of what is now Nicol Road, north of Hunt Club Road and west of what is now Oleson Road.  It’s interesting to see how the riding academies were intertwined, yet separate, with friendly rivalries. According to Trish Helmer, academies boarded horses and gave riding lessons to people of all ages.  These horses were called a “school string” – with different levels of trained horses for beginner, intermediate and advanced riders.  People would use these horses in all riding activities around the area, paying a fee and going with the trainer/owner and other riders.  A lot of people couldn’t afford the upkeep of a horse of their own.

I was told that riding schools were also favored because there were few recreation facilities in those days, which made it a popular activity.  There were competitions between riding academies, and there were often good-sized galleries watching the events, but the big horse shows were held at the “P.I.” – Pacific International – with people from the borders of Canada to Mexico attending.  The Hunt Club was a ‘member’ type of facility and was a place to gather for social activities.  Horses could be boarded at the academies, but there were no quarters for doing so at the Hunt Club. 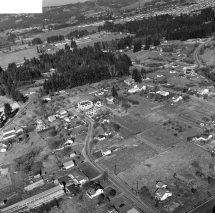 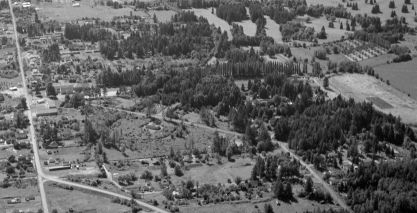 Until 1902, the Portland Riding Academy centered their activities in a stable located at 19th and Northrup.  That year they moved the entire establishment to quarters on Johnson Street between 21st and 22nd.  This academy belonged to James Nicol … and both areas were considered the outskirts of the city in those days.  Jim Nicol’s grandson reported that his grandfather would rent horses for buggies, delivery vehicles and riders. Articles sent by Trish Helmer zeroed in on the school itself and the riders from the academy who enjoyed the many trails and the wilderness leading into hills.  Often these riders would journey east to the Willamette river by way of the old Albina ferry to the Irvington race track, where many of the city’s first paper chases and competitive events were held.

It was in 1906 when Mr. Nicol decided to retire from the downtown Portland Riding Academy and move to a hop farm in Garden Home.  He sold the Portland Riding Academy to Harry Kerron, who continued to supply all the horses for delivery wagons and the Rose Parade, and who would patiently place rubber shoes on horses for those owners taking them over the cobblestone parade route.

There was a program listing a Portland Hunt Club event at the Irvington Race Track in 1901, but it wasn’t until 1906 that some members of the Portland Riding Academy apparently decided to incorporate.  A few of the most active members drew up a set of by-laws for “the improvement of horses, the encouragement of riding and the promotion of amateur sports, to hold horse shows and to hold amateur race meets.”  They bought property in Garden Home, built a clubhouse and track, and moved into quarters there in 1911. Some members built summer homes, and according to Andy Dignan, they were large, old square homes with big kitchens, large dining rooms and lots of bedrooms.  She also said that even though none of the original owners or descendants lives in them now, the homes remain and all are occupied.

Historic 1910 pillars at the entrance to the Portland Hunt Club, with Hunt Club fox logo, circa 1972

Historic 1910 pillars at the entrance to the Portland Hunt Club, with original resident names, circa 1972 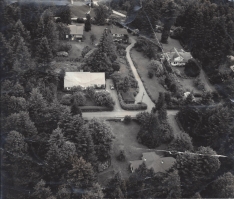 The Hunt Club insignia is inscribed in one stone as you enter the Hunt Club area, and names of the original homeowners who occupied these homes is on the other:

Many exhibitions and competitive events were held at the Club – such as the high jump, steeplechase, mile trot, foot race and hunter trials.  Fox hunting, which was a seasonal sport, usually occurred from late August/early September to October (it depended a bit on the weather), with the scent of a fox put into a gunnysack.  June was the annual Race Meet and August was their Civic Horse Show.

The Hunt Club also offered junior events for youngsters in the summer – some exclusively for riders 18 years of age or under.  In clippings Trish sent, I found out that judging and trophies were important parts of the horse scene, but some of their proceeds went to such causes as the Oregon Volunteer-Soldier’s Monument fund and the Babies Home.  Roundup parties, dances, straw hat contests and barbecues were evidence that members of this club had a lot of fun!

One event was described so well that I thought you might be interested in it – it was Portland Hunt Club’s first Hunter Pace Event,the first of this kind to be held in Oregon (year not noted), and there were nine teams:

“Time for the 4½-mile course was pre-established at 30 minutes flat, and teams were started at three minute intervals from the Judges’ stand on the track.  From there the trail (laid all the way with chopped paper so no one would get lost) led up the lane to the Nicol orchards and woods where a number of jumps were encountered, then around the Alick Wilson farm and along the right-of-way next to the golf course.  Down across the south fork of Fanno Creek and continuing along the trail to the Roland Pinger pastures.  Here we cut across to the A.C. Dockrell estate where the map called for a timed check of horse and rider, and where a very hospitable committee composed of the Alick Wilsons and the Bill Bishops dispensed a tasty fizz to the adult riders and lemonade for the juniors.  Off again across the fields and back to the Nicol Stables via the lane, kitty-corner across the Nicol race track, then turning right through the woods and finishing back at the Hunt Club.”

In 1914 and 1920, James Nicol sold a total of 135 acres in Garden Home to form most of the Portland Golf Club.  His grandson said the railroad went along a right of way.  He also said a portion of property was sold to Aaron Frank and another segment to Harry Kerron.

Harry’s son said the city was spreading in the early 1900s, so his father moved the academy from the Johnson Street location to property he bought in Garden Home in 1923, adjacent to the Hunt Club.  When Aaron Frank moved next door, the Kerrons had an indoor ring and track (where the racquet club later was) and a 60-stall upper barn where the staff did all the feeding, care and stall cleaning for those who paid for that boarding service. There was also a lower barn used for boarding which had approximately 15 stalls and were for those who provided their own feed, mucked the stalls, and did all the exercising and currying (grooming) of their own horses…and Mr. Kerron would get after any owner who did not exercise their horses!  At the far back was a wonderful old room filled with ancient harnesses and tack.  Just north of the lower barn was the quarter-mile track, with wooden grandstands on the south side and an elevated platform where the announcers and judges sat.  One of the most popular events was the Sulky race, which was a small cart generally pulled by a Standard Breed.

About 1925, and with a little more than thirty acres left, Mr. Nicols was convinced by friends that another riding school was needed.  Beginning with a barn, he set up a riding school called the Nicol Riding Academy and sent to Scotland for Alick Wilson to run it.  Gorham Nicol said the facility consisted of the family home, three barns, clubhouse, a couple of small houses for the people who worked there, a ring, tack rooms off the barn, a lot of hay storage and sixty horses.  Harry Kerron sent to Scotland for Alick’s brother Bill to come and teach for the Portland Riding Academy … and you can see why the friendly rivalry continued.

Gorham described the Paper Chases as competitions to see who could follow the trail of paper to the final destination in the shortest amount of time.  There were false trails to contend with, so there was quite a bit of doubling back.

Both owners reportedly took horses to Gearhart; James Nicols took them for the summer by riding them over trails, then by train.  It sounded like Harry Kerron took riders and they rode two days to get to Gearhart.  Don said they would congregate at the Gearhart Hotel and party for two days, take the horses on to Astoria and then would barge them back to Portland.  The Kerrons had several hundred acres in Hillsboro, so the horses could be rested a couple months of the year and then Harry would “drive’ them into Portland.

James Nicol died in 1933, but his daughter kept and ran the riding academy with Aleck Wilson.  Eventually the Oregon Episcopal School bought the Nicol’s remaining thirty-two acres in 1964.  Jane Ehrman noted that many fond memories and marriages came out of the Nicol Riding Academy.

The Kerron’s arena burned about 1970.  After his dad moved, Don Kerron moved the riding academy and boarding area out to the Scholls area and he and his wife are now showing their horses from Bend.  The Hunt Club clubhouse was sold about 1970 and converted into a private residence.

Many thanks to Andy Dignan, Trish Palmer Helmer, Jane Wilson Ehrman, Gorham Nicol and Don Kerron for the histories of the riding academies and Hunt Club.