Posted on November 20, 2019 by gardenhomehistoryproject

For children growing up in the Hunt Club area in the 1940s and ‘50s, it often felt like a park. Mike and his friends could be found sneaking through the gate into the Frank farm, shooting pheasants in Gertsch’s pond, ice skating on the swamp down the hill in winter, and cutting through yards to get to school. Mike Norris lived in Garden Home on Hunt Club Lane from 1943 to 1964. He graduated from eighth grade at Garden Home School and then from Beaverton High School in 1961. He went on to Colorado College at Colorado Springs and then to the University of Oregon Medical School in Portland (now OHSU). After residency in Los Angeles, he established his Family Practice specialty in Oregon City. 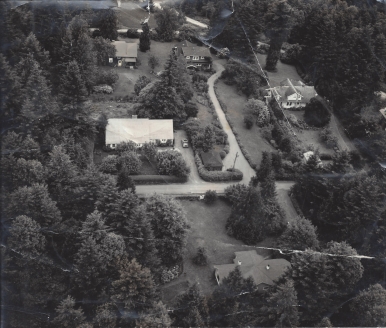 Mike’s parents, A.D. (Dick) and Mary Norris had four children, Andy, Michael, Robin, and Randy. His grandfather had begun the commercial real estate firm Norris, Beggs, & Simpson in 1932 and his father followed in that business and later established Norris and Stevens, Commercial Realtors. The family moved frequently during WW2 from Army Air Corp base to base, then back to Hunt Club Lane when Major Dick Norris served as a troop transport squadron commander in China 1944-5. Mike was born in California because of the war. The family lived on Hunt Club Lane from 1941 to 1965.

This was a time and place when the homes or cars weren’t locked in the Hunt Club area. The keys were often left in the ignition or at least over the sun visor. The Franks invited the local children to have swim lessons in their pool and an occasional free swim. The boys could play a few holes at the Portland Golf Club by entering below the hill where they weren’t likely to be seen. Most boys had access to a BB gun and often a shotgun to practice on pheasants, ducks, and geese, sometimes walking to the farm areas where Washington Square is now located. Fishing in Fanno Creek was fun.

Gertsch’s pond was south of what has become Vermont Street, west of Oleson. The land sloped down to the (now) Vermont area to cause swampy conditions which became frozen over the winter and fine for ice skating. Mike’s mother worked at the Junior League’s consignment shop and would buy the various ice skates as they came in so that most kids at the pond could find a pair near their size.

Mike and other neighbor kids often worked horse events with a lemonade and hot dog stand at the Portland Hunt Club with its 1/2 mile track. The 2-day Spring Meet was a huge regional equestrian meet with jumping, races, trotters, sulky races and more. Perhaps two thousand people came from all over to see the action from the grandstand and the grounds. The railroad was no longer running so cars were parked everywhere.

Mike’s father served on the School Board and his name is on the school plaque currently hanging beneath the old school bell outside the Garden Home Community Library entrance to the Recreation Center building. As the school population increased, more classrooms, cafeteria, and office were added. 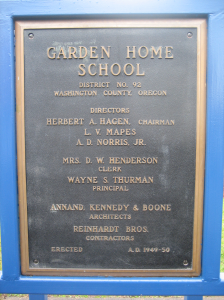 The eighth grade class of 1957 shows 43 students, 15 boys and 28 girls in two classrooms. As each class became larger, they were separated into two classrooms. Other class photos from Mike’s time show a majority of girls in classroom photos. Note the 3rd grade classroom with 11 girls and 5 boys. At this time, Garden Home Grade School was an Independent School District, No. 92.

[From School Days, A History of Public Schools in and Around Beaverton, OR. 1856-2000 by Gerald Varner:

Garden Home’s student enrollment grew to 380 students in 1959-60, the last year it operated as an independent district. The school had 433 students in 1972. The various grade school and high school districts around Beaverton were finally organized to become one unified Beaverton School District No. 48, on July 1, 1960. 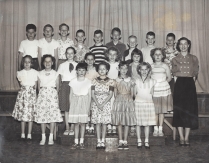 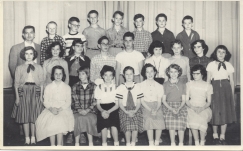 Mike brought us the program for the “Follies of 1950,” put on by the P.T.A. to raise funds for the new four-way blinking traffic light at the intersection. Prior to this light, children had to just take their chances crossing to the school. A sensational act was the Can- Can performed in full costume, by Irma King, Olive Barry, Bobby O’Callahan, Kathryn Peyton, Harriet Krom, and Mary Norris, Mike’s mother.

Garden Home School added a school bus in about 1950 and asked all the children to ride the bus. Mike and friends preferred to cut through the Hunt Club area properties to get to the school.

When the school decided to get a school bus the Russells (well-to-do-family) bought the school bus and then the school district paid them back since they couldn’t get a bond passed to buy the bus outright. My dad got his chauffeur’s license and drove the bus as well as being custodian.

The Russell daughter, Peggy, was a classmate of Mike. Mrs. Margie Russell was the daughter of Lloyd Frank whose brother was Aaron Frank owner of the Garden Home farm. Lloyd’s beautiful home is now the President’s office at Lewis and Clark College’s Portland campus.

Mike notes that the E.F. Bernard home as shown on our map is an error. Mr. Bernard’s name was Earl F. Bernard. The cement gate post does list E.F. Bernard, not F.F.

Mike also brought Shirley Bernard’s family cookbook that was a favorite for his mother. Mrs. Bernard was known to her family and the community to be a wonderful chef. Break Bread with Us with a cover drawn by daughter Julie Bernard contains over a hundred recipes with cautionary comments and suggestions as to serving or decorating. It has wonderful old recipes for boiled tongue, sweetbreads, pickle brines, aspic salad, mincemeat, cracker pie, shredded wheat appetizers and a hundred more delicious meals.

Dr. Norris officially retired from his Oregon City Family Practice but soon was involved in founding a free clinic and active with the Clackamas County Historical Society. He and his wife Alice have enjoyed hiking, biking, skiing, traveling, raising their children and enjoying their 6 grandchildren. Alice was mayor of Oregon City for 8 years as well as a community activist on many boards and committees, usually as chair. His three children, Tami Thompson, a 5th teacher near Seattle, Tim, a computer guy in Boise, and Will, a financial planner in Boulder, CO have collectively provided 6 grandchildren.

Mike’s brothers, Andy (GHS class of 1955, BHS class 1959) is a resort developer living in Santa Barbara, Robin (GHS class of 1961, BHS class of 1965) died in 1990, and Randy, a retired international businessman with ESCO, then Warn Industries, went GHS, to Whitford and then Lincoln HS lives in Redmond, OR.

[The following was written by Mike Norris]

Elouise Gilmore Shea Risley, (1911-1992) was raised on Hunt Club Rd. in one of the original homes which still stands. Her father was Phelps Gilmore, her mother Laura Gilmore, and brother Todd Gilmore, a local dentist. With her first husband, Charles Austin Shea, Jr., who worked in the family business J.F. Shea Co., she had 3 children Charles Austin III, (Chuck), b. 1937, Sally Gail, B 1938, and Todd. Charles Jr. died in 1942. The family moved from dam and tunnel construction sites regularly. Charles 3, and Sally were born in California. They all lived in Westchester County, New York during the 1940 census. Charles Jr.’s father, John F. Shea, found first a plumbing company in 1881 in Portland that morphed into a huge nationwide construction conglomerate still run by the Shea family.  The company was one of the 6 partner companies building Hoover Dam. They built the towers of the Golden Gate Bridge, and S.F.’s BART subway.  J.F. Shea Co. still exists as America’s largest privately held home construction company.

Elouise’s second husband: (1945-50) Warren Hull-was a movie star and radio and TV personality, and her 3rd was Victor Risley. After her divorce from Warren in New York, she moved back to the family home on Hunt Club Rd.

Son Chuck starred in football at Beaverton High (class 1954) then Stanford as star running back (class 1958) then graduated from Santa Clara U. Law School. He practiced law in California and lives in Gearheart.  Sally Shea Burget born 1938 and died of cancer in 2011 in Portland. Todd attended Columbia Prep and commuted with a special driver’s license at age 14, he was not listed as a living relative in Sally’s 2011 obituary.

Warren Hull (1903-1974) started out in operas in NY, then radio in 1923 where he hosted Your Hit Parade before moving from New York to Hollywood in the mid 30s. He starred in several movies. He hosted several TV shows including Strike It Rich, Your Hit Parade, The Warren Hull Show, and the Big Payoff. Elouise Gilmore Shea was his third wife.

Victor Swain Risley, (1901-1978) Elouise’s third husband whom she married on Dec. 31, 1951, owned an insurance agency in Portland. In 1940, he was living in Oak Grove, Clackamas County with his widowed mother, his brother, his wife Katherine, and sons Victor Jr. and Richard and working as an insurance salesman.

Ambrose Cronin (1872-1962) was another of the original home owners on Hunt Club Lane. In 1910 he was in the harness business in Portland and shortly thereafter moved to Hunt Club Lane near the new Portland Riding Academy. By 1920, he was president and manager of the P.J. Cronin Co, saddles and harnesses but switched later to “auto accessories”, a logical transition at the time. By the 1930s he founded and headed Cronin Co., electrical distributors with his son Ambrose Jr. as manager in both companies. He and wife May (1865-1955) raised son Ambrose Jr. (1904-1947) in Garden Home, He was best friends with Sam Jackson Jr. of the Oregon Journal and died with Sam when the brand new Journal’s news helicopter crashed in 1947. His widow, Betty, later married Jack Meier of Meier and Frank. In the 1950s, Ambroses’s long sloping driveway was a perfect race track for “soap box” type cars and wagons and his large lawn was a hard way for a kid to earn $5. He lived with a housekeeper until his death when the Tom Lekas family moved in.

Historic 1910 pillars at the entrance to the Portland Hunt Club, with Hunt Club fox logo, circa 1972

Historic 1910 pillars at the entrance to the Portland Hunt Club, with original resident names, circa 1972