Posted on May 26, 2020 by gardenhomehistoryproject 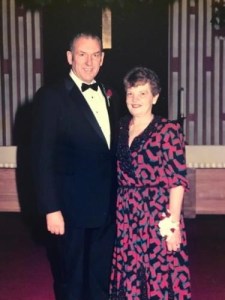 Her early years centered on church, family, and the neighborhood, so when Patty was recruited to teach out west in the Portland Public Schools, she was thrilled to learn about the wider world. Among the faculty at Gregory Heights (then an elementary school), she met friends who became like family. One of these friends, Jerry Roth, set her up with a blind date after her first PTA meeting. This is how Patty met Bill Gazeley.

Patty and Bill fell in love, married and, though they were both only children, eventually found themselves with four kids – Barb, Mark, Carolyn and Katie. In the early years, Bill worked long days at his family lumber yard and soon started his own business in Tigard, Columbia Hardwood & Moulding, Co. For a year or so, Bill worked a second shift in Garden Home in Southwest Portland, building his family a home. Patty had her hands full with the kids but brought Bill picnic dinners on the construction site. Patty and Bill lived in Garden Home from about 1959, and Patty stayed in their home after Bill’s death in 2003 (just days before their 50th wedding anniversary) until she moved to Mirabella.
Patty was curious and open. Nothing was beyond her interest. She wondered about Nostradamus, and whether the kids would be healthier if they took kelp and liver pills. She investigated foot reflexology and tried yoga and tap dancing. She and Bill were faithful members of Valley Community Presbyterian Church and later, Calvin Presbyterian Church. Her faith kept her on a quest to understand God’s vast love for us and was never a source of bigotry or fear.

She was a marvelous, straight talking mother who supported her children and helped them explore their interests and potential. Even when money was tight, Patty allowed the kids to buy any book they wanted, and she put aside money for ballet lessons, horseback riding, canoe trips and community theater classes. Patty made sure the family traveled. In the summer of 1967, she and Bill hitched the trailer to the old yellow station wagon and took their four kids for a six week trailer trip, which included stops at: the Mormon Temple in Salt Lake City; the Chief Crazy Horse monument, Black Hills and The Corn Palace in South Dakota; and Bean Station, Tenn., for visits with relatives; among other places.

In the early ’70’s, as the company grew, she joined Bill to work at Columbia Hardwood & Moulding, Co. as personnel manager. She was a tireless advisor and supporter of Bill and the company and many evening discussions centered around CHM.

Patty drew friends and neighbors together and her teacher friends became the “Five Families,” a group that celebrated holidays, shared life, and who maintain close connections even to this day and into the next generation.

She was spirited and forward-thinking. She could be heard saying in the ’70’s, “Do you know the opposite of a male chauvinist pig? A decent human being.” She worked on the S.W. Portland Greenway Bike Path committee to secure a pathway system throughout Washington county, including the Fanno Creek Trail that now edges Patty’s and Bill’s former home in Garden Home. She was a member of an investment club for over 20 years, and chaired the “Lunch and Learn” committee at the Multnomah Athletic Club. She was a planner who saved and invested enough money to send six grandchildren to college.
Patty and Bill cared about arts, community, their faith and supported many causes including the Oregon Community Foundation. Patty learned of Young Musicians camp and sent all her kids there to learn to play music, speak French, and gain exposure to other faiths. She served on the board of directors of Young Musicians and Artists. In her later years she enjoyed belonging to the Assistance League of Portland.

Patty and Bill discovered the charming town of Neskowin on the Oregon Coast in the early ’60’s and it became their refuge. After retirement, Patty also indulged Bill in summers in Desolation Sound, off Vancouver Island, on Bill’s boat. They hosted friends and family, flying in the kids and grandkids on seaplanes for long weekends of adventures in wild, beautiful and remote places.

Patty passed away April 29, 2020, in peace and surrounded by her family. She is survived by her children, Barb (Tim Evans), Mark (Martha), Carolyn (Brad Van Allen), Katie Twombly (Allan); and her grandchildren, Michael and Patrick Gazeley Romney, Katherine and Jack Van Allen, and Andrew and Elizabeth Gazeley.

A party to celebrate Patty’s life will be held after restrictions on gathering are lifted. In the meantime, the family would love to hear your favorite memories of her. Memorial contributions can be made to YMA, Inc. and Veritas School in Newberg.

[Editor’s note: Patty was instrumental in the development of the footpath that runs along Garden Home Road.]