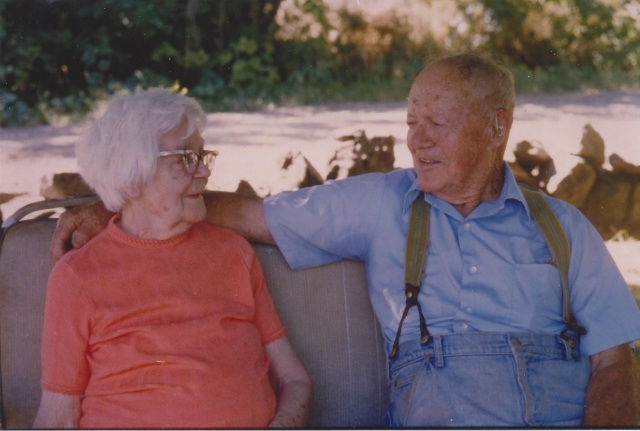 In 1937, Glenn and Isolda Steele relocated to Garden Home from Antelope, Oregon. Isolda worked at the Garden Home School preparing lunches for the children and staff in the late 1930s, 1940s and 1950s. Isolda and Glenn Steele were both from pioneering families in the Antelope area in Morrow County, north of Madras.

According to a fascinating book on details of the early Antelope history, Antelope, the Saga of a Western Town by Art Campbell, Isolda was from the Herbert C. Rooper family who settled there in the late 19th Century. Various photos and text portray Isolda as an adventurous girl, seen with a sports car built by a blacksmith at the Rooper ranch in 1916. The Roopers had a large home in town and a ranch 15 miles NW of Antelope. This book describes a church Christmas party when children received their gifts from their families. Isolda recalls the oranges and hard candy she received in her stocking. She said her “Antelope Christmases were the best anyone had.” Glenn and Isolda are pictured on horses in 1917. “Glenn is wearing his black sheepskin ‘wooly chaps’ which were very warm for cold weather riding. Their wedding followed in June and was the big event in the church that year. Glenn joined the Navy soon after they were married and served in World War I. He also played on the Antelope’s baseball team in the 1920s.” Glenn later played for the Garden Home baseball team.

Isolda and Glenn Steele, 1917 honeymoon on horses – from Antelope, the Saga of a Western Town

Kathie Steele, granddaughter, relates that in his boyhood, “Glenn’s occupation was a sheep herder and cattle wrangler. He was also enjoyed playing baseball. Glenn was a professional house painter and paper hanger. He painted many of the homes in the Alameda District in Portland. He went into the Navy at the end of WWI as a cook but the war soon ended. He was an avid reader, collector and inventor. One of his inventions was the rock tumbler. I believe he made that out of old washing machine. Besides rocks, he also collected coins. He liked to buy trunks at auction. Usually they were full of old phone books, but occasionally he would find coins or stamps. He acquired several typewriters somewhere and taught himself how to type. He would send his political opinions to the Oregonian. Raised a Baptist, he remained extremely conservative.

Glenn built the first house at 7250 SW 70th that he and Isolda lived in along with a second house on the same property. Glenn would pick up odd jobs painting and fixing various things. He was a master at repurposing and utilizing available material on hand. His passion was rocks; not just any rocks but semi-precious stones that he would load into his polishing machines. The garage had water lines that had been specially set up for the rock polishing machines. Once they were tumbled and polished he would place them in various barrels on the property. The most beautiful stones were placed in glass display cases inside their garage. Grandchildren who came to visit could always take home a shiny prize.”

Kathie’s brother, Barry Steele, resides in Beaverton with his wife Jeanne. Barry’s strongest memories of spending time with his grandfather surrounded rock collecting. Barry would go on rock finding expeditions with his grandfather searching the ground for treasures. Both Barry and his wife Jeanne remember uncovering metal garbage cans full of stones at Isolda and Glenn’s home. Once, Jeanne found an amethyst laden toilet seat in the backyard; the purple stones were set into a plastic resin material. The collection over the years that Glenn amassed was so impressive that a portion of it, specifically the Brazilian Amethyst was given to the Smithsonian. 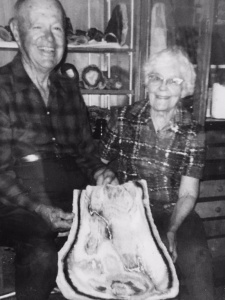 Glenn and Isolda Steele donating a Brazilian amethyst to the Smithsonian

1976 Community Press article about Glenn and Isolda Steele (click to read, article provided to us by their granddaughter Kathie Steele)

When Grandpa built the house, he designed the kitchen counter height for Grandma. The counters were about 31 inches high compared to a regular kitchen which is about 36 inches high. As a young girl they were the perfect height for me too. The kitchen had a dropdown work table on the left side of the kitchen. To the left of the table was Grandpa’s bedroom with his fiber mattress of shredded coconut husks.

Grandma had grown up during the depression and many things were not available to her. She had also lived in a remote area of Oregon. I was most impressed with the soap slivers she kept in a tin can in the kitchen. She used these to wash kitchen things, hands, dishes, counter tops, whenever she needed soap she brought out the soap slivers. Fels Naps was one I remember. She told me she used it for laundry and not to use it on my face. She also kept every leftover and finished it off at the next meal or the next day.

I remember baking pies & cookies with her. She taught me how to make the scallop edge on pies. My mother used a different method. I still use her scallop edge today. I remember her recipe for hamburger gravy over mashed potatoes which was very popular at all elementary schools. I remember she greased her cookie sheets with bacon grease.

She would take me to her friend’s home and we would drink tea. This was fun and special. I don’t remember their names. It was on a street opposite from Whitney’s and I had to walk beneath an arbor of flowers. I was really impressed. We also walked to the post office and drug store.

She sewed a lot. I remember one year she made pajamas and night gowns for all eight of her grandchildren. They were red and white striped. She also made me a blue corduroy jumper when I was in the 8th grade. Besides these things she would make braided rugs from scraps of material. She tried to teach me the art of tatting but I never caught on. One of the things I was given after her death was her box of sewing threads.

Grandma was quiet and seemed happy all the time. She never complained about her life. She was the baby in her family so she didn’t have the hard chores, but she had chores. One of them was to hold the wood while her brother split it. She lost the tip of her middle finger doing this. She said she was about 5 years old. Then she laughed and told me she was glad it was only the tip of her finger.

Don Olson of Bend, Oregon; a cousin of Barry Steele, put together an excellent cookbook featuring the recipes, household hints, and photos of Glenn and Isolda Steele. A copy of the treasured recipe book was generously donated to the Garden Home History Project by granddaughter Kathie Steele. The book features detailed recipes alongside black and white photos chronicling Isolda’s lineage from Antelope, Oregon in the early 1900’s, Isolda as a child, as well as some early pictures of both her and Glenn. Besides recipes for cakes, puddings and cookies there are also home remedies for anything from ants, to soap, to removing nails and screws that have rusted into wood. One of the more interesting home remedies is to fix a leaking stove. Since Isolda cooked all the family meals on a wood burning stove in the kitchen, this recipe must have come in handy many times to prevent ash from spilling onto the kitchen floor.

Louise Cook Jones attended Garden Home School from 1954-1962. She recalls Mrs. Steele as an important part of the school. She would visit each lunch table, encouraging those who were slow to eat to finish their food so they could have some time at recess. Louise loved Mrs. Steele’s cooking. “Her yeast rolls were amazing – you could smell them cooking all over the school. And she made wonderful homemade chocolate pudding, served in tall glass dishes.”

In 1939 the PTA minutes report that Isolda announced that hot lunches would now be served.

Louise Cook Jones’ sister Patti Cook Davies attended the school in 1946-1954; Patti always looked forward to Mrs. Steele’s snickerdoodle cookies and macaroni and cheese. Louise’s brother Warren Cook attended the school from 1952-1960. He remembers Mrs. Steele always being so kind and everything that she made was good.

Isolda and Glenn’s Garden Home residence is located to the north of the Old Market Pub. The Pub once was the 1945 Community Cannery and then in 1950, the Whitney’s Cannery, owned by Mark and Leona Whitney. Taken from the aerial photos given to the Garden Home History Project by Otto Arndt, negative 19 of the series shows Glenn and Isolda’s home in the mid left hand side. The Garden Home Cannery (now Pub) is roughly in the middle of the frame near the bend in Multnomah Boulevard on the left side of the road. 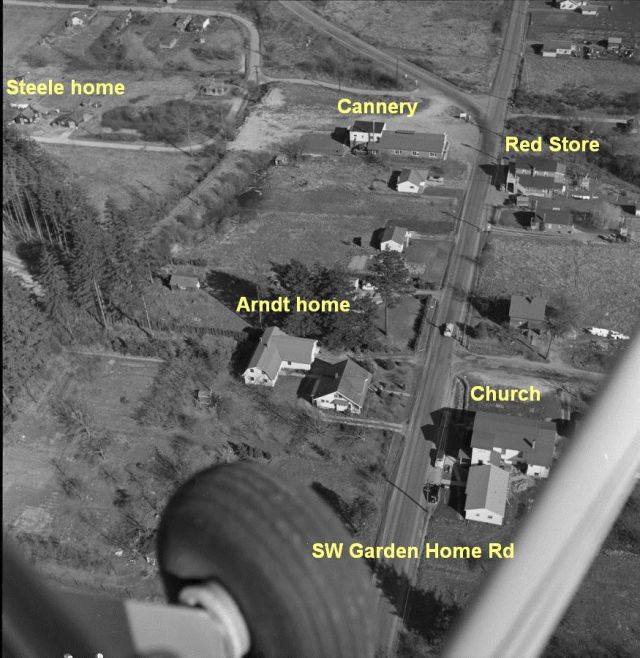 The most recent owner of Glenn and Isolda’s home is Gordon Rice who purchased the home from Barry’s Aunt Gwen in 1991. The house had been vacant for approximately six years. Gordon remodeled the house over several years to make the home more up to date with modern comforts. The outhouse was removed and a bathroom was placed inside a small addition that includes an entry way. The home’s porches were also added on and a sliding glass door leading out to the back porch was placed. The house is cozy with a kitchen, main living area and two bedrooms. In 1993 Gordon placed the house on a foundation for it to be able to stand the test of time.

Gordon Rice very generously gave Barry and Jeannie Steele (pictured below) a lock he has had for the past 25 years with the welded initials of Glenn Steele. The loft in the upper part of the garage needed a ladder which remains today, stamped with E E Steele, Glenn’s father, Elmer E. Steele.

Welded S for Steele on padlock 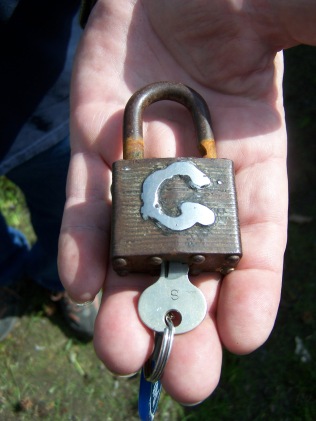 Kathie tells the story that Grandma was quiet and seemed happy all the time. Grandpa would have given her the sun and the moon if he could. After all, he tried to buy her birthplace, Antelope, Oregon. The sale price at the time was $10,000. He had $5,000 and he wanted Kathie’s dad to come up with the other $5,000 but it didn’t happen.

However, Antelope became known far and wide when the Rajneeshees purchased the Big Muddy Ranch in 1981, near Antelope, and created the Rajneeshpuram which lasted until 1985. The activities included numerous Rolls Royce cars, poisoning a public salad bar, and threatening lives. Later some of the participants were convicted of various crimes. The property has now become a Young Life Christian camp since 1999 and Antelope returned to its roots of a small western town.

Like Loading...
This entry was posted in Memoirs, People and tagged cannery, Cook Jones, Mauroni, PTA, Steele. Bookmark the permalink.