Posted on July 20, 2018 by gardenhomehistoryproject

Periodically, the Garden Home History Project works Christina Friedle, Chair of Geography at PCC to facilitate student research in her Geographic Information Systems (GIS) Certificate course in the area of mapping and geographic research. This article is a student research report prepared by Brendon Slattery, 2018. Two other student research projects can be found in the Resources page, one about the contruction of buildings by decad by Spenser Kuroda and one about the local floodplains by Erin Woolbright. 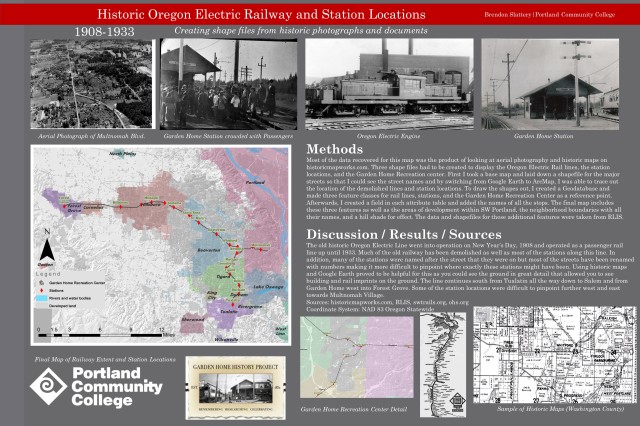 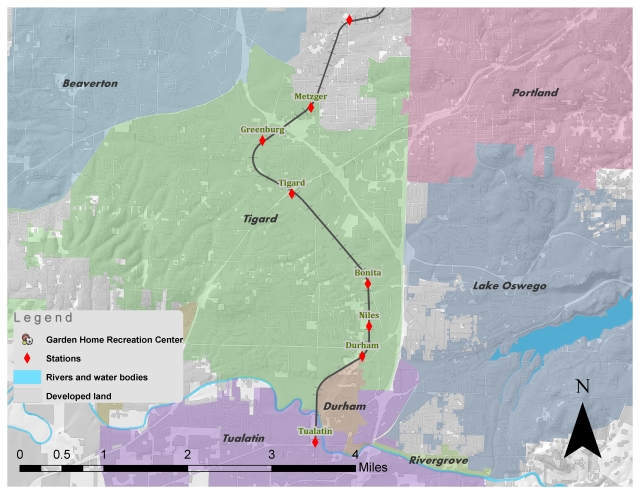 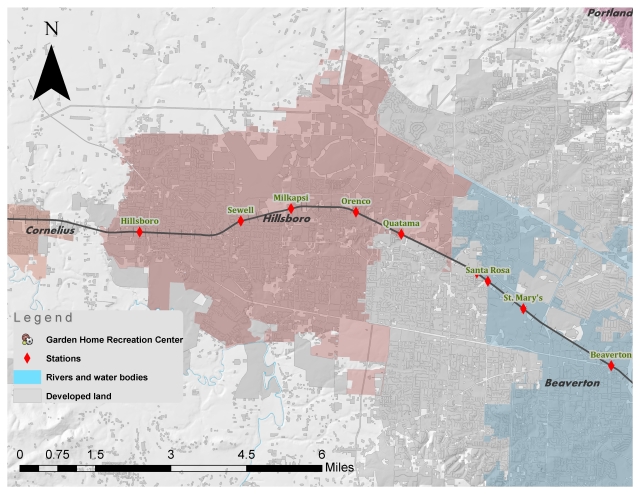 Most of the data recovered for this map was the product of looking at aerial photography and historic maps on historicmapworks.com. Three shape files had to be created to display the Oregon Electric Railway lines, the station locations, and the Garden Home Recreation Center. First, I took a base map and laid down a shapefile for the major streets so that I could see the street names, and by switching from Google Earth to ArcMap, I was able to trace out the locations of the demolished lines and station locations. To draw the shapes out, I made a Geodatabase and made three feature classes for rail lines, stations and the Garden Home Recreation Center as a reference point. Afterwards, I created a field in each attribute table and added the names of all the stops. The final map includes these three features as well as the areas of development within SW Portland, the neighborhood boundaries with all their names, and a hill shade for effect. The data and shapefiles for these additional features were taken from RLIS.

The old historic Oregon Electric Line went into operation on New Year’s Day, 1908 and operated as a passenger rail line up until 1933. Much of the old railway has been demolished as well as the stations along the line. In addition, many of the stations were named after the street that they were on, but most of the street names have been renamed with numbers making it more difficult to pinpoint where exactly these stations may have been. Using historic maps and Google Earth proved to be helpful for this as you could see the ground in great detail that allowed you to see building and rail imprints on the ground. The line continues south from Tualatin all the way down to Salem and from Garden Home west into Forest Grove. Some of the station locations were difficult to pinpoint further west and east towards Multnomah Village.

Like Loading...
This entry was posted in Early History, Places and tagged Oregon Electric, PCC, trains. Bookmark the permalink.