Posted on June 23, 2018 by gardenhomehistoryproject 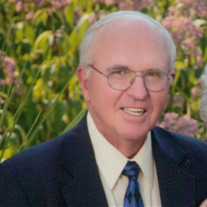 Ken was born in Longmont, CO to Frank and Leona Rupp Neuburger on October 22, 1940, and died on June 18, 2018 in Portland, OR. The family moved to Salem, OR when Ken was in eighth grade where he attended St. Joseph grade school and Serra Catholic high school (class of 1958). Ken briefly attended the University of Portland and graduated with an engineering degree from Oregon State University in 1963 where he met his future wife, Jeanette Wachter. Ken worked as an engineer with the federal government and retired from US Fish and Wildlife in 1997 after 30 years of service. Ken and Jeanette had almost 54 years of marriage with many great adventures and happy times.

Ken’s passions were his wife and family as well as playing and watching sports. He was a lifelong supporter of the Beavers and a competitive and recreational athlete – playing football and basketball in his youth and softball and golf later in life. He never missed an opportunity to spend time with his family and watch them pursue their own passions.
He is survived by Jeanette and two children, Karen (Damon) Vickers and Jim (Amy) Neuburger, five grandchildren, Paul, Thomas, Alaina, James and Truman, brothers Jerry and Wayne and sister Diane.

The funeral will be Friday, June 22, 2018 at St. Luke’s Catholic Church in Woodburn at 11:30 am. There will be a Rosary at 11:00. In lieu of flowers the family is requesting donations to Rock Steady Boxing for Parkinson’s where Ken boxed for several years to help with his Parkinson’s disease. Checks can be sent to Kimberly Berg, 21983 S. Saling Road, Estacada, OR 97023 in honor of Ken Neuburger.