Below are excerpts from an extensive chronology of Beaverton High School by Lisa Sandmire, derived from past issues of the Beaverton High newspaper, The Hummer, and other historical sources.

Click here for a detailed chronology of events and happenings at Beaverton High School excerpted from historical issues of the BHS Hummer.

1842: First school in Washington County opens. It was an Indian mission and open to all.

1917: The US entered WWI, declaring war on Germany.

1945: Prom Tips: clean hair, Either pile neatly on top of head or put a velvet bow in to hold it back. Maybe a sequin beany. Only wear a small corsage as a large one isn’t appropriate during the war. Let the boy open doors for you. Tell your date he looks nice, too. Boys, help her with her wrap. Help her into the car. Dance the first two dances with her and at least every third dance. 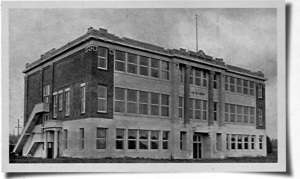 1949: April 13, 1949, 11:56a, a 7.1 magnitude earthquake centered in Olympia, WA is felt all over the PNW. Building suffers some cracks in the brick facade and on the ceiling in one classroom. BHS closed school for the day “not because of danger but because the quake left them little concern for their studies,” according to IR Metzler.

1950: 3rd floor condemned. It is commonly thought that the instability of the third floor, causing its condemnation, was due to the 1949 earthquake, but the instability was actually caused by the removal of a support wall between two classrooms on the second floor sometime during the ‘30s or ‘40s which caused the floor to sag and shake. The engineers also proclaimed the floor joists to be inadequate and the concrete to be of poor quality. The removal happened during the summer of 1951. William Logan, future principal, first hired as teacher and JV coach. Enrollment is 898. (Hummer 9/25/1951) 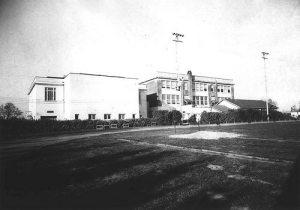 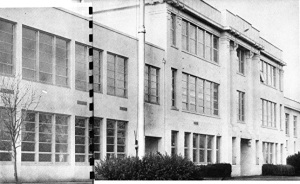 1968: Hummers no longer retained and chronology ceases. (Please donate any you might have.)

3 Responses to Chronology of the Beaverton High School physical buildings