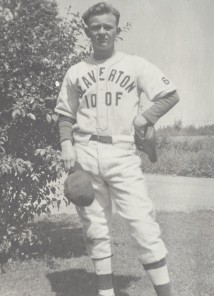 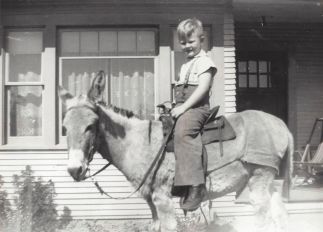 Jannette Godwin (Wassenberg now) married Jack Godwin and had three children in the 1930s: Jalene, Jean and Jim.  Jalene has been our source for this Godwin material and it is used with her permission.

William (Bill) and Mary Godwin had three children:  Jean, Jim, and Jack who was born in 1931 and died in 1969. They lived in the yellow home at 7765 SW 87th Ave, Garden Home.  This was a major street in early Garden Home and was called Westgard.

Mary Godwin’s parents (Jonathan and Charity Steele) and the Metzgers founded Metzger.  The Steeles (Mary’s parents) had the post office, grocery and feed store plus a dairy farm. William Zachary Grant Steele (called WZG) was the postmaster also, plus he sold and delivered milk to the whole area, including Garden Home, before the Feldman and Marugg dairies were started.

They owned at least 35 acres in Garden Home plus acreage around Metzger, in all 300 acres.

Mary S. Steele went to Lincoln H.S. and rode the Oregon Electric train to and from school.  After graduation she went to Binky Walker Business College and there she met William A. Godwin and they were married in 1924.

William (Bill) got a job as a U.S. Postal Service employee on the railroad, in Grants Pass.  In 1931 they moved to Garden Home and bought a cute little three bedroom home on Westgard Ave, which is now 87th Ave.  Bill dug a basement under their house by hand and put in a wood burning furnace and clotheslines for drying clothes.

They had 3 children, Jean, James and Jack who went to Beaverton H.S.  At that time they had a choice to either go to Tigard H.S. or Beaverton.  Their neighbor Rosella Nebert chose Tigard High.  Rosella said she used to make cookies to entice Jack to come visit.  She said he would eat the cookies and immediately leave.

Jack went to Lewis & Clark College and was in the Oregon National Guard.  His unit was activated and after being discharged he was married.  They went to Oregon Technical Institute in Klamath Falls and took carpentry, blue printing and drafting.  He came home and worked for a builder for a year, then went on his own as Jack D. Godwin Builder.

Jack and Jannette had 3 children, Jalene, Jerri and Bill, all of whom went to Garden Home grade school, where Jack had gone to school.  He bult their own home on Dolph St. off Westgard Ave. and went on to build over 800 homes in the Garden Home, Metzger and Tigard area.  He sponsored a men’s softball team called the Garden Home Tiger Lillies and in 1969 he got cleated playing second base.  He died in November of 1969 from a blood clot at age 38.

*The following notes are from an interview with Jalene Godwin, Oct. 4, 2012 by Elaine Shreve

Auntie Pat is William Alexander Godwin’s sister.  She came West on the Oregon Trail and married a Tiedeman.  She lived with Bill and Mary during her young adult life.

Godwin Court may have originally been called Godwin’s Glen.  It was in the Jannette Subdivision.  It is located south off of Alden and 87th.

Jalene traveled all over the U.S. with her dad, Jack Godwin.  They enjoyed having a family band, she played the accordion and Jack the guitar.