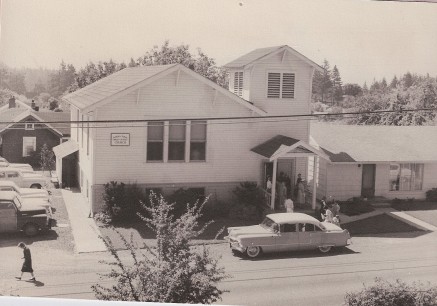 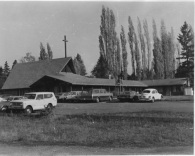 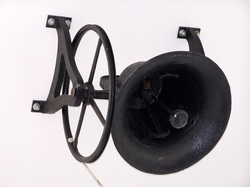 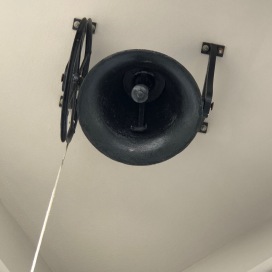 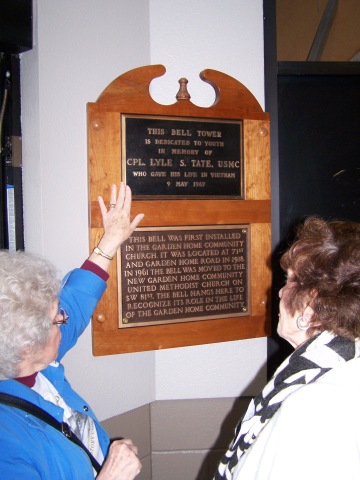 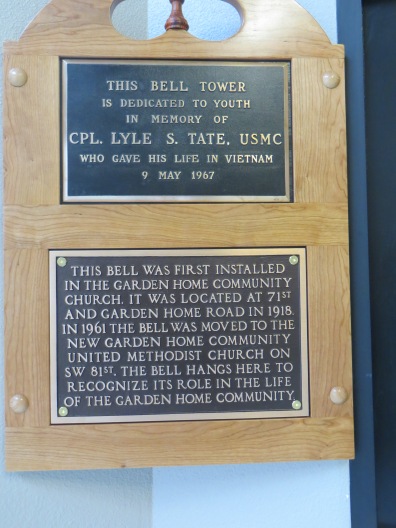 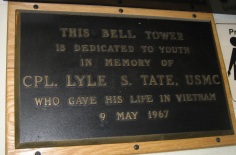 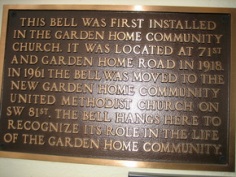 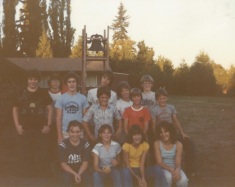 The bell in Lamb’s Thriftway in Garden Home has the following description on a bronze plaque:

The Garden Home Community United Methodist Church, located on SW 81st, south of Garden Home Road, closed in June of 1994. The large brass bell had hung near the front door on an iron frame.  The children of the Church and sometimes adults would ring the bell prior to the service. In earlier times, the bell was rung to announce community or world events. Old-timers tell us about the bell ringing in the old church to announce the end of the World War I.

According to church documents, the bell hung in a bell tower that had a plaque stating “This bell tower is dedicated to youth in memory of CPL .Lyle S. Tate, USMC, who gave his life in Vietnam 9 May 1967”  This tower was dismantled in the bell removal process but the plaque commemorating Lyle Tate also hangs in Lamb’s Thriftway, near the bell.

The church on S.W. 81st was built in 1961. The original church was located where the professional offices are at 71st and Garden Home Road. The bell was hung in the belfry there in 1918. That church was commonly called the Community Church and generally had Methodist pastors.

The historic bell has hung in the Lamb’s Thriftway clock tower since 1995. According to church records “The bell is to remain in the Garden Home Community, identified and displayed in a public place for all time. We appreciate Colin Lamb’s participation in the community and the historical preservation and displays that he has done. The bell will be on long-term loan by the Metropolitan District of the United Methodist Church, Oregon-Idaho Annual Conference, 1505 SW 18th Ave., Portland, Oregon 97201. The “loan” is to assure that the bell remain in the Garden Home Community on public display.”

Like Loading...
This entry was posted in Churches, Events and tagged event, Lamb's Thriftway, Methodist Church. Bookmark the permalink.