Posted on January 26, 2021 by gardenhomehistoryproject 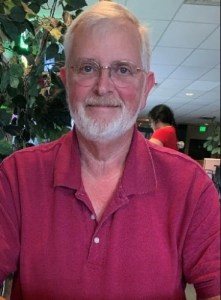 Daniel James Gustafson of Vancouver, Washington, died January 6, 2021 of pancreatic cancer. He was 65.

Born July 13, 1955, to Leonard and Louise Gustafson in Portland, he was raised in Garden Home and graduated from Beaverton High School in 1973. He spent his 20s working for newspapers in Portland, Milwaukie, Eugene, Springfield, Gresham, Beaverton and Anchorage, Alaska, all the while chipping away at his college degree. He earned his bachelor’s degree in 1985, the same year he joined The Oregonian, where he worked as a designer and editor for 30 years until his retirement.

In 1996 he went to Tijuana, Mexico, with members of his church on a house-building project. On that trip he got to know Susan Morgan, who had been a neighbor of his, and they fell in love. They were married less than a year later. Theirs was a marriage of great respect, love, joy and travel, particularly their annual trip to Kaua’i.

He is survived by his wife, Susan; his father-in-law, Kenneth E. Herman of Papillion, Neb.; stepchildren, Anna Benz of Portland, Joseph Bogner, and his wife, Jahnavee Soul, of Vancouver; three grandchildren; two great-grandchildren; and seven nieces and nephews.

A memorial service will be held at a time and date to be determined at Beautiful Savior Lutheran Church in Vancouver. A celebration of life will take place outdoors July 13, 2021, Dan’s birthday. Memorial contributions may be made to the church’s Building Fund or to one of Dan’s favorite charities, Kaua’i Albatross Network, 80 North Country Road, Setauket, NY 11733.

[Editor’s note: Daniel’s father, Leonard Gustafson, taught 8th grade and served as principal at Garden Home School in the 1960s. Daniel’s mother, Louise, was a piano teacher in the community.]