Posted on August 3, 2020 by gardenhomehistoryproject 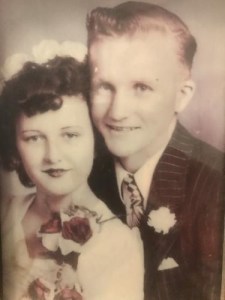 Arley first came west at age 15 by himself working in the CCC’s, building trails out of the Ranger Station at Oak Ridge, Oregon. He was a graduate of Willamette University in business, Pacific University teaching degree, and a Master of Education Administration U of O.

Arley loved education. He was at Beaverton High School teaching business and retail selling, Athletics Director and Vice Principal for 28 years. When he retired the Beaverton Police Dept gave him a badge for being so helpful with kids. He was especially proud of convincing BHS to have business courses, connecting kids with local businesses. He loved to come home and tell fun stories about work or make plans with Mary for another Boyce “Big Adventure” traveling and camping about Oregon or going back to Minnesota with six kids in a Mercury station and a flatbed trailer full of camping gear in tow – singing, “We ain’t got a barrel of money, maybe we’re ragged and funny – but we’ll travel the road sharing our load, side-by-side!” The six kids at one point were all teenagers at the same time.

Arley loved hunting and fishing especially out of Halfway, Ore., in Hell’s Canyon where the girls spent time raising their families when young and Sandy (Kennedy, Brumnette) still lives. Arley and Fritz started “Wildwood Products of Oregon” – making bird houses which became very popular. Arley helped Sandy by supporting her business of “Wildflowers of Oregon” – which gained N.W. fame receiving the Governor’s award for best small business in Oregon, appearing in displays on 5th Avenue in New York City and being distributed as far as Japan. Robert also has his own business, Control Systems West (Instrumentation).
Arley, the great disciplinarian, believed in hard work at any age. When the children were small, he would post the chores schedule for the week. The reward was a silver dollar which he got at Harold Freece’s Shell Station on Canyon Road where he worked on Saturdays to make ends meet. All seemed so organized, solving arguments among the six kids – until Fritz resorted to bribing his younger sisters to do his chores with candy and treats – then all chaos reigned again! The offspring and all who knew Arley will recall with fondness his jovial attitude, interest in others and his remembrance of the past fun stories of friends, relatives, coworkers and cohorts that he and Mary shared the road with along the way.

Arley has six children, Sandy, Robert, Allen, Fritz, Marilyn (deceased), Beverly and their spouses; 14 grandchildren; 19 great-grandchildren; and two great-great-grandchildren.
Arley served in the South Pacific on the Atu – an aircraft carrier that he helped build as a welder in Vancouver, Wash. Arley will be laid to rest with Mary, the love of his life, with a graveside Covid-19 service [only 10 allowed] in Willamette National Cemetery with Navy Honors.

[Editor: Many former Beaverton High School students from the 1970s era will recall Arley Boyce, vice-principal under principal Bill Logan. Arley lived off of east Garden Home Road into the Multnomah area. We enjoy the photo below of Arley with Don Dunbar, former principal of Garden Home school, taken at our October 20, 2012 Centennial Celebration of Garden Home School opening event. ] 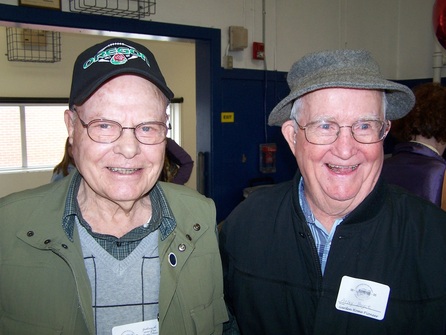 Like Loading...
This entry was posted in Obituaries, People and tagged Beaverton High School, Boyce, Obituaries. Bookmark the permalink.