Glory, the pony, with Jacki Wisher’s sister Kathy Lane as the driver with two neighborhood girls, Nikki and Mari. Probably 1964 or 1965.

Letha and her husband, Sanford (Sandy) moved to Garden Home in 1962, just after the October 12th storm; they found lots of downed trees at their newly purchased home at 8005 SW 69th Avenue. The family was looking for a larger home for their four children. This acre-plus property was soon home to two Shetland ponies and their cart, a large garden, fruit trees, fir trees, and a huge black walnut tree valued for its dense shade and eventually wood sales.

Jacki’s dad was out of the Army as a paratrooper in the 81st Airbourne and worked as a bus driver, furnace repairman, railroad switchman and then as a long haul truck driver with his own truck. At a later time, Letha worked at St. Vincent’s Hospital in the early days of coding (ART).

Jacki and her husband Tom Wisher live just a couple blocks away from the home of her childhood, on SW 67th Avenue. Their children Nate and Heidi attended Montclair Elementary School in the 1990s, going on to Whitford and then Beaverton High, graduating in classes 2001 and 2003. Nate was on the Beaverton High School football team who won the state championship in 1999. He also went with the Beaverton High school band to march in the Gator Bowl and Disney Magic Music Days in Florida in 2000 as a member of the drum line.

Jacki’s sister Kathy and her husband, Larry Collins, live just down the street from where Kathy grew up on SW Mayo Street. They had 3 children, Kristen, Renee, and Shelby. Kristen was in the first class transferred from Garden Home Elementary School to begin kindergarten in the brand new building of Montclair Elementary School. All 3 of the Collins children attended Montclair Elementary School, Whitford Junior High School, and Beaverton High School. In high school, Kristen was on the tennis team, Renee and Shelby were on the track team.

The family enjoyed the daily Alpenrose delivery of milk and dairy products. Shopping was usually done at the local Lamb’s Thriftway.

The two 11 month old registered Shetland ponies, male and female born a day apart from separate mothers, were brought home in the family car in two trips. They also purchased their harness and the pony cart which they drove all over the Garden Home area. Jacki’s favorite thing to do was to ride to the Aaron Frank farm arena and let the ponies run their hearts out around the arena. These ponies and their activities at Alpenrose soon took over the family life. The ponies were named Tony and Glory.

Jacki and her older sister Kathy attended the Northwest Pacific Shetland Shodeo competing in various types of pony games such as jumping, barrel racing, and pole bending. The event Kathy won was “Bridle, Saddle, and GO!” The Butt’s family had a pinto Shetland pony named “Cotton-Eyed-Joe”. That pony would always win all the competition at Alpenrose as their family rode the circuit every year so it was extra special that Kathy won the trophy for the “Bridle, Saddle, and Go!”

Alpenrose sponsored a 4th of July Pageant put on by “Portland Youth for Christ.” Kirby Brumfield was the Producer and Master of Ceremonies at the 4th of July Pageant. Jon Kreitler was the musical director of the Christian performing group “New Americans”, passing the baton along to Roland Boyce later. People came from far and wide to fill the Alpenrose grandstands and enjoy the 4th of July Pageant for several evenings which included many costumes, wagons and ponies. They also enjoyed the Alpenrose Western frontier town buildings and other animals, all for FREE. One chapter of the Pageant portrayed each signer of the Declaration of Independence; the huge draw at the end of the Pageant was the awesome Fireworks for the 4th of July!

Jacki and the fifty or more kids participating in the extravaganza all stayed in large tents on the Alpenrose property. Their ponies stayed in the pony barns. They ate their meals in the Alpenrose owners’personal home. Carl and Virginia Cadanou’s home is still on the property.

Many kids auditioned to join the New American Christian ensemble composed of instruments, dancing and singing directed by John Kreitler. The last year this pageant was produced, Kathy auditioned for the “New Americans” and was accepted to join the group playing her flute in the band.

Alpenrose started the traditional “Easter Egg Hunt” many years ago. A few years ago when Jacki took her young granddaughter to the hunt, she was applauded as having attended these Easter Egg Hunts since the very first one which was over 50 years ago. Alpenrose also brought Rusty Nails and his “medicine show” to the Garden Home Thriftway every summer to entertain children and adults. Let’s never forget the well-known Rusty Nails and his son, Shingle Nails. Jacki and her siblings used to ride their bicycles up to Alpenrose to ride around the Velodrome. During Christmas there was always the “Story Book Lane” with all the baby animals inside all dressed up with fake snow. During the Christmas shows, Jacki used to run the popcorn and the cotton candy machines for sales to the public. 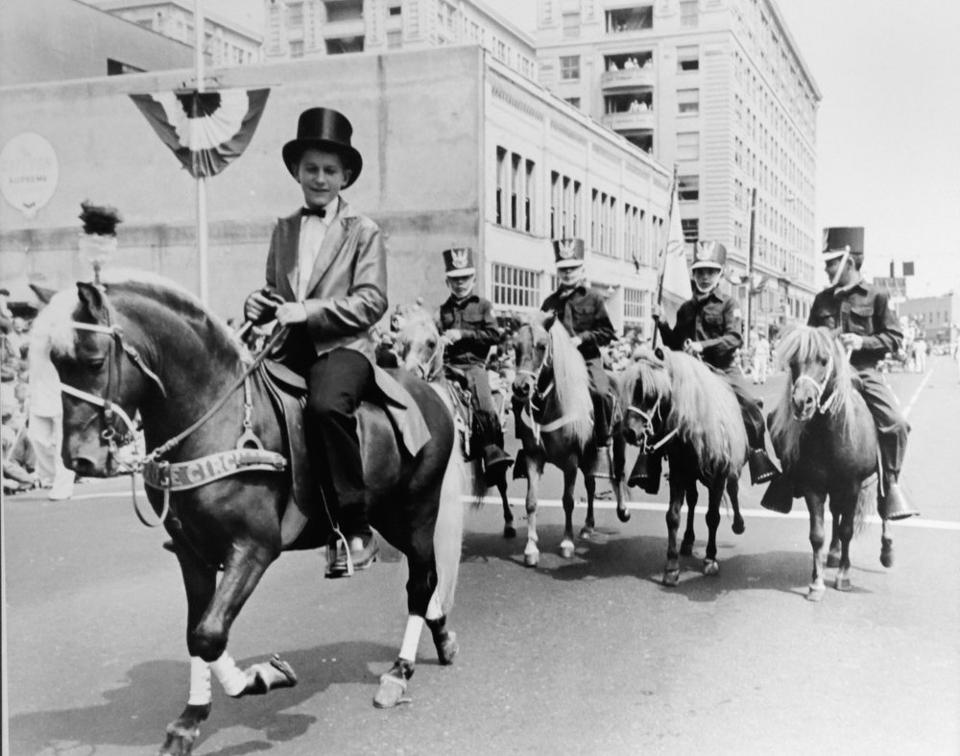 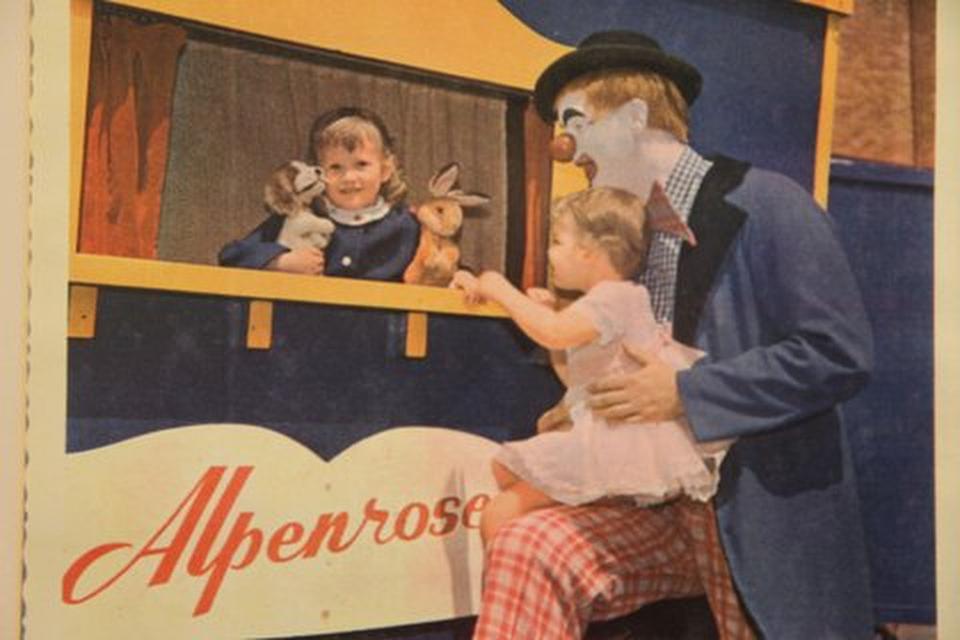 Jacki said her back yard was a huge forest of very tall trees. “We used to shinny up the trees and make them sway for fun. The neighborhood kids used to come over and play “kick the can” in the yard until really late in the evening. Parents never worried about where kids were. We were always playing!”

Other families in Garden Home at the time included a Presbyterian Minister Walker, the Tinkle’s, the Lindahls (Ken, Marge, Arnie, Rick, and Greg), the Shattuck’s, Gail and Lucille Berg, Perkins family,VanTyle’s, and the Russells had horses.

After the Russell family had all graduated from high school, they exchanged houses with the Kevin Freeman family of Olympic equine competition fame. The Freeman’s added a new arena to the property. Kevin competed in the 1964, 1968, and 1972 Olympics, winning silver team medals in 1964 and 1972.

Bill Walker and family moved into Garden Home in 1959 to pursue a job at Tektronix. A few times the neighbors closed off the street for a neighborhood picnic including dancing and music.

Both Letha and her daughter Jacki agree that Garden Home has been a wonderful place to raise families. Although Letha now lives in a retirement facility, she continues to appreciate Garden Home.

By Elaine Shreve with additions by Jacki Wisher. Letha Lane and Jacki Wisher interview conducted May 31, 2018.

Like Loading...
This entry was posted in Memoirs, People and tagged Alpenrose, Lane, Wisher. Bookmark the permalink.