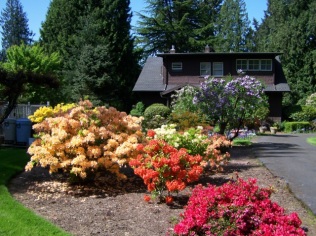 The most recent home to be designated as a Century Home was the home of Catherine and Tom Lekas. This house was built for an original member of the Portland Hunt Club, Mr. and Mrs. Ambrose Cronin who then moved from Portland in 1911 to Garden Home. The Century Home Committee members, Virginia Vanture, Stan Houseman, Garden Home History Chair Elaine Shreve, and Board Representative Sasha Kaplan were there to present the plaque and a booklet specifically written for this Century Home. A special guest was Tom Hubka, member of the Architectural Heritage Center and architectural historian. The group was joined by the Lekas’ daughter, their daughter-in-law and five of their grandchildren. Catherine Lekas surprised everyone with a freshly baked lemon cake and coffee which was enjoyed on the tree shaded back porch. 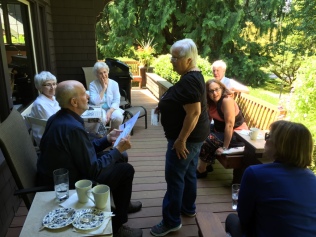 Joseph Jacobberger, a Portland architect well known for his Craftsman style architecture, designed the home. In addition to residences, Jacobberger along with his son Francis, designed a number of churches and public buildings in the Portland area. The home was constructed in 1910 for Ambrose M. Cronin, Sr. and his wife May Warden Cronin. Built as a summer home, the house allowed the Cronins to enjoy the social activities of the Portland Hunt Club. Ambrose was one of the original members and served as an early president.

Ambrose was the manager of the Cronin Company which was founded by his father P.J. in 1878 on Front Street in Portland. The company was a leather, harness and saddle manufacturing firm. The business was quite successful but as time went on, the popularity of the automobile forced the company to convert its merchandise to auto accessories and tires. The Cronin Company continued and eventually split into two entities: one retained the name Cronin Company and is a wholesale supplier of flooring material; the other is Electrical Distributing Inc. Both businesses are managed by descendants of Ambrose and Mary.

The current owner, Tom Lekas, is a retired attorney whose interests over the years have included hunting and fishing as well as being a bagpipe player with the Clan Macleay Pipe Band. Tom and his wife Catherine raised five children in the house and when Catherine was asked what she might like future owners to know about their family experiences living in the house she suggested this be included: 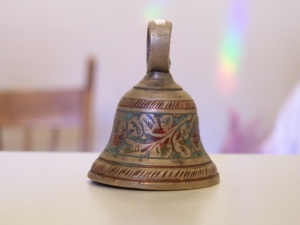 The family owns a small bell, the kind of object that comes into a house for some forgotten reason and might be placed on a shelf and then forgotten for long periods of time. For each of the five Lekas children, the bell has at one time or another rang when no one was there to touch it and with the ringing there were often heard voices, adult voices, again with no one present. The voices might come from another part of the house, upstairs, in the hallway or from the basement but never in the same room where anyone could see someone standing. Never could they convince their parents of what they had experienced. But each child believed the others. One frightening evening the bell rang and when those who were home investigated and found the bell had been moved from where it had been placed on the shelf. Friendly Spirits? Who is to say? The younger Lekas’ experiences have become part of the family history.