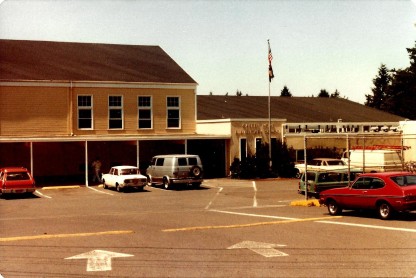 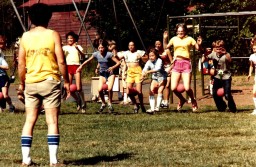 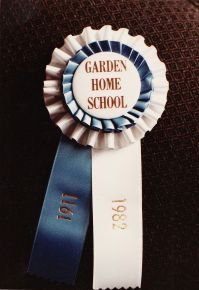 Garden Home Elementary may have been newer than McKay or Raleigh Hills elementary schools, and there is no doubt that it played a crucial role in making our cross-roads community a memorable part of eastern Washington County. It had a rural start, grew quickly to meet the commuter train-facilitated suburban demand for quiet living, and yet was a center of independent country living. As a single-school “district,” there were also quickly emerging advantages to joining the Beaverton School District. Who might have realized, at the time of that merger, that in about three generations, the school could also be very vulnerable to being closed? This story is about more than the closure of a neighborhood educational facility; it is also a statement about the resilience of the Garden Home community.

Development of Garden Home quickly led to demand for a school closer than either McKay or Raleigh Hills. The first school was located in the second story of a store owned by Chris Jager, he had opened in a former residence. The first dedicated school building opened in 1912 and the evolving structures kept pace with quickly changing needs.

In the late 1970’s and early 1980’s, Beaverton’s new residential housing was rapidly growing on its western borders and the district’s reputation for quality was being “marketed” through association with new homes, desirable developments and new buildings. Having a quiet, friendly neighborhood with older roots wasn’t the hot image of the go-go 70’s, or the upscale destination of Oak Hills. A comfortable neighborhood has aging owners who enjoy their homes and generous lots, and over time houses on the eastern borders of the district had fewer students. With a slowing economy, many aging neighborhoods were not having the high turnover that normally kept schools filled. These are the fundamentals of declining enrollment and there is nothing unique to Garden Home in this regard. All districts face this dilemma.

As a design engineer working with high quality products built at Tektronix, I became adept at the use of statistics to assure first-time quality and sustainable production, and very early in my living in Garden Home, Joy Pierce, my predecessor on Local School Committee, encouraged my involvement in bringing business sense to community issues. As soon as the district formed a study committee, I was most interested in getting intimately familiar with the data processes used to make decisions about building utilization. My company had begun expansion throughout Beaverton and I was working in the new Wilsonville campus.

When the Beaverton School District was growing quickly, there was desire to keep buildings up to date and to replace older structures. This had some play in the concerns of the committee selected to study the declining enrollment, but with selection of decision criteria, this was technically relegated as having little or no value. McKay and Raleigh Hills were brick-faced structures and looked very formal and solid. Garden Home, built under its own state-sanctioned district, was an all wood structure like its original 1912 building. It was obvious that other schools in the study area looked more formidable. Committee members from McKay, Raleigh Hills and Raleigh Park were not going to give up their schools and have the older style Garden Home remain. The committee had very typical biases, and to work through and around them was challenging. It was ironic that Garden Home’s heating system was actually the most efficient building in the study area. Heat loss was lessened by having multiple stories, and it was obvious that Montclair had been built with lots of windows and with little concern for heating fuel costs, so it ranked poorly
As an engineer with a side hobby of residential design, I enjoyed doing some analysis of the gains that could be made with improved windows and insulation, and after doing a cursory study, I found that the energy efficiency rankings of the considered schools changed rather dramatically. That created a bit of consternation on the part of committee members representing the newer schools. The popular assumption was that newer schools were more efficient, but room layout was a large factor. Montclair elementary was about to get a lot of unpopular scrutiny.

The outlier in the study area was Montclair. It was built at a time when open-classroom areas were enjoying a brief national popularity. Beaverton, like many districts tried to follow the trends and to demonstrate leadership by being in the middle of innovation. Their facilities could also take advantage of commercially available school construction plans. It looked like smart cost avoidance if architectural services merely adapted a stock plan to a given site. Montclair’s floor plan had detractors and fans, and discussions about the plan were very heated. Several Garden Home parents felt the open style was distracting and faced with transfers into Montclair, they feared the prospects of requesting transfers to adjacent schools.

When a controversial topic faces a public organization like schools, the image-conscious administration likes to keep challenging emotionally-charged issues at bay. Voter memory is good when budgets and building bond measures hit the ballot, so it was no surprise that the local school committees in the study area were asked to sit on a panel convened for an “open process.” The committee can take the heat and publicly wrestle with the many emotional factors that come into play.

Decision Criteria – Were we leading or following the District’s decisions?

When Local School Committees in the five-school study area were first seated, fellow GardenHome members Sue Miner and Charlene Land and I listened to the presentations, looked around to assess the representative of the other four schools, and felt, just like the others, that there was a sense we might just be putting lip service to a slam-dunk, pre-planned district decision. I had to acknowledge that I was probably the least politically savvy guy in the room. After all, when faced with the guillotine, the engineer in me wanted to make sure the blade was well lubricated so it could be fast, painless and that whoever’s school was closed could regroup and move on.

Camps had been forming before I had even moved into the neighborhood, and our peaceful little Mayberry RFD was already under serious threat by well-meaning parents representing the neighboring schools. In reality, Montclair had members who felt their open-classroom style was under attack. McKay, bordering on Vose district was feeling that their location on heavily traveled Scholls Ferry Road, and more modest neighborhoods were pair their pair of Achilles heels. Raleigh Hills was the school with “senior statesman” status. Even though it was equally faced with heavy traffic and safety on Scholls Ferry, the sight lines were less vulnerable to pedestrians and busses than McKay. Raleigh Park was its own neighborhood, had upscale homes, professionals as parents and was in the enviable position of being more of a smug group of “safe observers.”

The almost instantaneous reaction in Garden Home to the formation of the Study Committee was the formation of a citizen’s action group calling themselves Garden Home Community Action Association, Inc. (a non-profit organization could rightfully raise money for the defense of their cause). Local insurance businessman Ken Evanson was president, and Tom Walt, a public safety engineer for PGE was named vice-president. Local long-time school district observer and attorney Henry Kane was drawn to the cause, and had a plan to seek internal information from the District. All it took was for a couple of firebrands to raise the sense of self-defense. Great! “We’ve got a cause, we’ve got the energy, and by golly we’re not going to take this laying down” was a very natural reaction from entrenched fans of the Garden Home community.

An early fact presented by the District was that there were only 1,336 students attending five schools with the capacity for 2,016. It was obvious that fiscal responsibility on the part of the District called for action, and it was equally obvious that each affected school would mount its own effort to defend its turf, traditions and to assert their “community rights.”

Finding Reason in the midst of Emotion

The task force selected by the district was composed mostly of Local School Committee members and Garden Home was represented by Sue Miner and Charlene and me. We had several months of work to achieve, and the task was facilitated by Thelma Reuppell, herself a school administrator in the Hillsboro district. We requested many documents and presentations from budget committee members, finance, facilities and a range of other Beaverton district staff. It took lots of dedicated work to study the reports and information, but eventually, criteria were developed to compare each of the facilities, and to carefully consider the impact on neighborhoods if any of the schools were closed. The facts were not initially clear, and the emotions ran strong throughout the process. Enrollment projection accuracy was questioned, and a short reprieve was granted, but the committee was called back in just a year. The final recommendation went against Garden Home.

At the End – A Silver Lining

As soon as the conclusion of the task force was ratified by the School Board, discussions began in earnest with Tualatin Park and Recreation District and within a year, the buildings deemed too inefficient for use as a school were being remodeled to create a new Recreation Center. Today, the building is more active than ever, and provides a wide range of classes and community space.

About the author. Bill Gellatly grew up in the Capitol Hill neighborhood in the 1940’s and 1950’s attending the small elementary school there, a year at Multnomah elementary, a year at Benson Polytechnic, and the balance at Wilson High. He had several paper routes, and grew an interest in local history by visiting with customers. In those kid-friendly days, you could just tell your mom or dad that you wanted to go play and then be gone for hours at a time exploring ponds, watching construction or hanging out with a buddy when it was raining. With a career as a designer and then engineer for Tektronix, Bill saw the importance of friendly neighborhoods as an environment to raise his family, and moved into the Vista Brook neighborhood in 1976. He knew the Garden Home area after riding his bicycle to the home piano teacher Maude Steen in the late 1950’s.

3 Responses to The Closing of Garden Home Elementary School