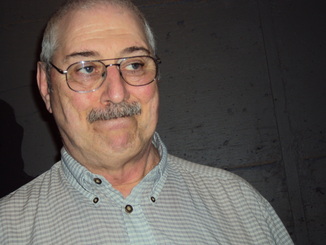 Bernie Rice worked at the Whitney Cannery the two summer seasons after he graduated from Beaverton High School in 1962. The tasks varied but primarily he worked as a “cook.”  This meant he was involved in the actual processing of the food, which was either boiled or processed in large pressure cookers, called “retorts.” In addition to acting as a cook he also trained others in these skills. He was a maintenance worker for the various machines, and like the others employed at the Cannery was asked to do just about anything that needed doing. The loading dock, which still stands toward the northeast end of the building, was a job he took on at the age of 19. He says that because he had never built anything like that before he made a few mistakes but the dock is still there in 2011.

The days were long. When crops were ready to be harvested they needed to be processed quickly to retain top flavor. Once the canning process began the crew worked until it was finished. It wasn’t unusual to work well beyond eight hours. Sometimes the crew worked from twelve to fifteen hours to get the day’s work done.

The cannery actually served two different groups of customers. The first were people who came wanting to can their own produce. The second were groups or businesses for whom the Whitneys had contracts with to provide canned fruits and jams. Individuals who brought their own fruits and vegetables were allowed to process any amount. This could mean canning anywhere from one to over one hundred cans. The second group consisted of local schools or businesses. These orders were canned under the label Nattie-Ann. The cannery also sold gifts packs of preserves under that label. 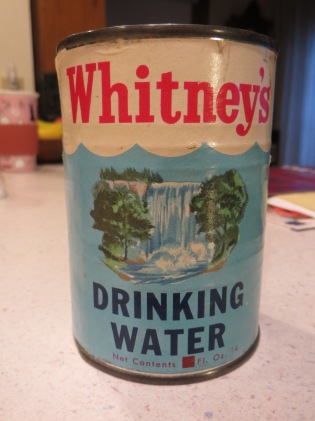 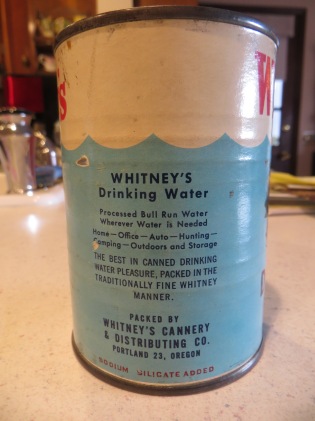 Each contract had its own set of problems to solve. One such was a contract to can water. The reason for the contract has been lost in time. This occurred during the period of the Cold War in the early 1960’s. At this time a National Civil Defense Plan stipulated the stockpiling of large amounts of food and water in case of war and this may have been the reason for the contract. But what is remembered is how much trouble it was to can the water properly. The problem was that if the cans filled with water were not kept extremely hot throughout the entire process, the cans would rust. It took a considerable amount of time to figure out how to prevent this. In the end the cans had to be kept shrouded to keep the heat at the boiling point. Leona Whitney remembers the shrouding being of a heavy material the weight of a carpet.

The 2-½ lb. and number 303 cans were purchased from the Continental Can Company in Salem. The Whitney’s son, Doug, would drive to Salem in a closed Dodge truck to pick up the cans and transport them back to Garden Home. Canning produce for the school system was also a part of the market the cannery served. Waste material such as the cobs from corn and the ends from the green beans where sold or given away for animal feed. Almost everyday large loads were taken to a pig farm on Scholls Ferry Road. This resulted in some rather excited pigs when they noticed the truck driving into the farm yard. This agreement benefited both the farmer as well as the Whitneys.

The procedure for canning went like this. Beans, or whatever was being processed, were packed into cans which then went down a conveyer belt to the “capper” where lids were marked in such a way as to identify the customer and the contents. From there they went onto a conveyer belt and were put either into the boiling bath or into the retort. After this they were put on trays and sent back to the cooling racks. As the cans cooled, those that were safely processed imploded making popping noises. Different sized cans made somewhat different sounds. When this occurred the cannery “sang.” The cans acted as a melody overlaid by background sounds coming from the machinery and staff voices!

Safety standards required that cans not properly sealed were deemed unsafe andwere not released to the public. An improper seal could result in air getting into the can and the food spoiling. Additionally, this could result in pressure building up inside the can. One morning a woman brought in enough berries to fill twenty of the larger cans available. She left the berries to be processed and planned to pick them up later in the day. After processing it was found the cans had not sealed properly. When she returned to pick up her order she was informed of the problem and told that because of the potential health hazard the cannery could not release the canned fruit. This resulted in a very displeased and angry customer who insisted in having her cans given to her. Reluctantly the cans were released but only after the woman signed a form absolving the cannery of any liability for problems arising from eating the fruit. The cans were placed in the woman’s car and off she went. A short time later she returned madder than ever. A few miles down the road, one of the cans had exploded. Another followed this, and then another, until all 20 cans had discharged their syrupy berries throughout the car. She now claimed it was the fault of the Cannery that her car was such a mess. And she threatened to sue the cannery. That didn’t happen, but the event was long remembered by those there that day.

Those using the cannery represented a true cross section of the community: local homemakers, children with parents, and virtually anyone with a large garden or orchard wanting to preserve the fruits of their labor. Bernie remembers one group in particular. These were a group of nuns who in the 1960’s still dressed in floor length black habit. The Sisters were a curious group and would often crowd as close as possible to see how the different machines worked. To prevent accidents, a line was painted on the floor beyond which only staff could work in the area occupied by the large pressure cookers and steamers. One day several of the Sisters was standing very near to the retort, right on the painted line, and had leaned over as close as possible to observe Bernie working next to a retort. Part of this task required Bernie to check on the amount of pressure building up in the retort and, if needed, release some of the steam buildup by pulling up on a valve situated on the top on the huge vat. When this was done a noisy cloud of steam would be released. Being young and feeling a little mischievous that particular day, Bernie watched the Sisters and when they got right on the line, he reached up and pulled up the valve. With the area fillied with steam and a loud hissing sound, Bernie watched with amusement as the nuns lifted their long habits scattered every which way as noise and the steam cloud filling up the area they had just occupied!

Accidents did occasionally happen. One day when Bernie was working a bearing on a conveyer belt quit moving. With the conveyer belt out of order everything came to a stop. The staff was just about to take a break and Mr. Whitney told Bernie to get it fixed before the break ended. To replace the bearing required Bernie crawling under the conveyer belt, which lay close to the floor. He reached the area needing to be fixed only to find he had the wrong size wrench. This meant he had to crawl back out, find the right size wrench somewhere in the boiler room and crawl back under the belt. Knowing he had only a short time to finish the job, and rushing, he suddenly felt the top of his scalp hitting the underside of part of the conveyer belt. Not realizing how badly he had gashed his head he continued on and repaired the problem in record time. But now he realized that blood was running down his face and he was feeling somewhat confused. He started toward the office thinking someone there could bandage his head and he could continue working. But now he found himself faint and so he dropped down and crawled until he reached the office door. As he reached up to open the door he began to feel faint and suddenly found himself falling face first into the room. His most vivid memory is of the looks of shock on the faces of the women gathered there.

It was a while before the gash down the top of head healed. In the meantime he took a lot of kidding for his strange haircut, a bare pathway from front to back down the middle of his scalp! 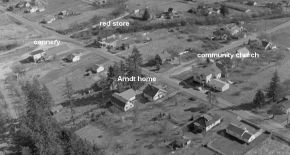 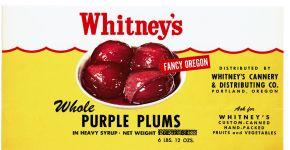 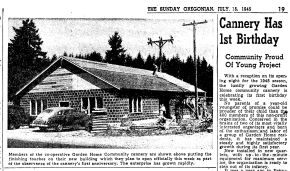 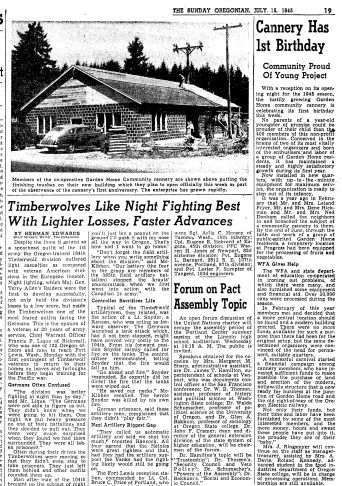 Aerial photo by Otto Arndt shows cannery just to the left of the fork in the road, at the location of today’s Old Market Pub. Circa mid 1950s.

Old Market Pub at the location of the old cannery

Like Loading...
This entry was posted in Memoirs, People and tagged cannery, Old Market Pub. Bookmark the permalink.