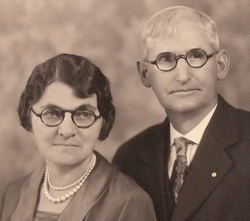 Family
Charles’ father came out first and got a job at the freight depot. About a year later, the rest of the family followed. Charles, the grandfather, worked for a freight depot company near the Broadway bridge in Portland. He rode the Oregon Electric train to and from work every day.

House moving
John tells about moving a house where Ted or his parents-in-law were living. They put huge rollers under the house and hooked it up to their 1929 Essex Touring car and a 1927 Chevrolet and pulled the house to the desired position on the lot. This allowed them to build a tennis court in the back. Geneva’s parents, the Hendricks, lived in the house. Leonard and Maryetta lived off Oleson road in a very small “starter” house. Ted and Geneva also.

One year they celebrated Christmas at Ted and Geneva’s house. John was thrilled to see his father carry John’s new bicycle out of the back of the Essex Touring car. Garden Home Road and other major roads in the area were paved in the 1930s. Many side streets were very rough.

John Adams as a child

Boys play
John often came out to visit his grandparents and play with his uncle Leonard who was a couple years younger than him. In the barn out back they raised chickens and ducks. The grains and feed were stored in the barn under a big box. Nine year old grandson John and his uncle Leonard, about 7 years old, would sneak out to the barn at night and sit on the big box and shoot the rats and mice with their 22 pistols. Sometimes they would go out back of the house, through a hole in the fence, walk up the tracks and spy on the activities of the Frank estate and their horse jumping practices. John and Leonard also enjoyed the forbidden “shooting” the ducks with their rubber guns. These guns were made with a thin piece of rubber from an inner tube which was pulled tight against the wooden “gun” and held with a clothes pin. Pressing the clothes pin would release the rubber which ricocheted off the duck. The grandparents scolded them for such behavior.

Firecrackers
The boys would often go up to the Red Store, also called the Smith store, for candy or to get supplies. The grandparents used canned milk and tossed the small cans aside which made wonderful fun when the boys put firecrackers in them for explosions.

John tells about a later time when Leonard met a girl skating at Oaks Park. After their “date”, Leonard would walk home to Garden Home after midnight.

Death
The grandparents Musetta died in 1935 and Charles in 1937. Both are buried at the Crescent Grove Cemetery on Greenburg Road along with a number of other family members.

Leonard then moved into his parent’s home on Garden Home Road. The house had a dirt basement and in order to make it saleable, they hand dug and poured a cement basement. John’s grandparent’s house had an indoor toilet.  As a child, John was chastised for throwing sticks in the open cesspool before the cover was put on.

Addendum from Mildred Stevens
Leonard Adams, son of Charles and Musetta Adams, has died. He and Maryetta lived on Alden, the first house after 71st. The ladies were surprised that Maryetta had two children late in life. Subsequently, Leonard had a stroke and Maryetta had to take over many duties she had not done. Mildred taught her how to drive and Maryetta went on to become a very capable and independent woman. Leonard and Maryetta lived with the Gibbs family while Leonard’s house was being built near the Frank farm. Leonard was the Sunday School Superintendent at the Community Church. Ted Adams, another son of Charles and Musetta Adams, lived on the right hand side just as you turned off Garden Home Road onto 80th. 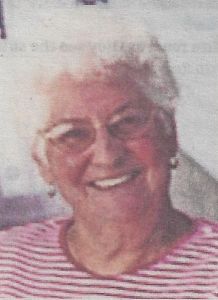 Lucille was the wife of Culmer “John” Adams and shared in his history.  John’s grandparents lived on the north side of SW Garden Home Road just east of the Thriftway store property in the 1930s and ‘40s.

She attended Jefferson High School.  Early in their marriage they lost everything in the Vanport flood but moved on to raise their family in the Beaverton area.  She was preceded in death by her husband and siblings and survived by her children Susan, Cathleen,  and Jeffrey and their families.

Like Loading...
This entry was posted in Early History, People and tagged Adams, Red Store. Bookmark the permalink.