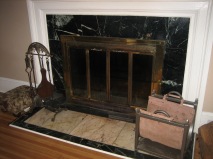 This stately historic Dutch Colonial home at 6750 SW Oleson Road has been listed on the National Historic Register. The home has been owned by Dr. Frank and Anjali Rosenbloom since 1999. The 1.6 acre property is filled with beautiful rhododendrons and azaleas. In the 1950s and ‘60s the Zolling Nursery had the property and sold camellias, rhodies and other plants by mail through their catalogues. One of the largest Dove trees (Davidia Involucrata) in the Northwest displays its white handkerchief-type bloom in late May.

The home was built in 1922 by E.D. Schanen of the Schanen Marble Works fame. This company placed marble in many of the most important buildings in the Northwest. The home is reputed to have been filled with beautiful marble and the fireplace still shows the artistry of the original marble. Unfortunately, other marble is thought to have cracked over time and has been removed from the home. The listing on the National Historic Register in 1983 was achieved due to the fame of the Schanen Marble Works family. The tax adjustment period has been completed.

E.D. was the son of N.A.. Schanen who was born and raised in Germany. He went to Paris to learn the marble and stone cutting trade, coming to America in 1870. He came to Portland in 1882 and began working in marble cutting and became co-owner of several marble businesses. He worked on the Portland City Hall, the old St. Vincents Hospital, the Sellwood Crematorium, Crown Point and other buildings of the time. N.A. and his wife had five children including E.D. who would follow his father into the business, changing the name to Schanen Marble Works.

Schanen Marble Works was then involved in placing marble in the new Elks Temple, J.K. Gill building, Oregon Agriculture College (OSU), Masonic Temples, churches, medical buildings and many school buildings. In 1901, E.D. married Ruth Kelly and they also had five children. According to the Multnomah Archives biographies, E.D. was born about 1878 and would have been about 44 when he built the family home on Oleson Road.

The home was purchased by the Zolling family in 1950 and they began their rhododendron nursery business. The Zolling sign is still on the garage. The Rosenblooms have heard that their garage was the first built in the area and housed the first automobile in the area.

Several other families have owned the property since the Zollings, including former Governor Neil Goldschmidt in the 1980s who requested the National Historic Register listing.

The property adjoins Hideaway Park to the north and is beautifully landscaped.

Like Loading...
This entry was posted in Homes and tagged Schanen, SW Oleson Rd, Zolling. Bookmark the permalink.