This speech was given by Elaine Shreve on June 5, 1994 at the closing of the Garden Home Community United Methodist Church. This church was located at 7650 SW 81st street. 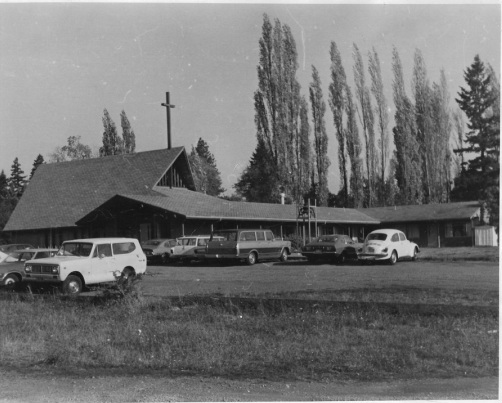 This church has always been an important part of the community. I’d like to share some of the story of our community and our church.

Garden Home – a perfect name that described the lovely surroundings that the early settlers saw in the 1850’s. It was quoted in early documents as “gently rolling with first rate clay loam. Beaver ponds along the creeks.”

The Indians camped along Fanno Creek over in the Progress area to gather huckleberries which grew in profusion.

Gradually small communities of settlers developed. Some of the early names in the area include Augustus Fanno, the McKays, the Denneys, and the Stotts. Mr. and Mrs. Nichols came in the late 1880’s, Aaron Frank in the 1920’s.

The Nichols later took in a young German immigrant, Chris Jager, who had jumped ship and found Garden Home to be the perfect place. He helped the Nichols in the store and later he platted the land allowing space for a large garden in each lot. (Later identified as Danish.)

Chris Jager built a larger 2-story store commonly known as the White Store or Jager’s store. The other store was the Red Store. Chris allowed the second floor to be used by the community. The children began their first school there before the Garden Home school was built in 1912.

Chris Jager also permitted the people to gather on Sundays upstairs in the White Store for the very beginnings of this church.  The church was served by the early Circuit Riders from the  Methodist Church and the services were also occasionally conducted by the neighbor, Mr. McLaughlin, referred to in one account as “old man McLaughlin.”

Chris took care of Mrs, Nichols and as she got older she loved to sit on the wide porch of the store along with her parrot. The parrot had a wonderful repertoire of expressions, including singing some opera. It was noted that should a child start crying, the parrot would join in for a crying duet.

The clouds of the first World War were gathering in Europe while here Garden Home was becoming a transportation center with a major train station, the Oregon Electric, down off Garden Home road where it joins Multnomah Boulevard.  In 1913 there were 51 trains running each day to Portland, Forest Grove and down the valley to Salem, Albany and Eugene.

Women had finally gotten the vote here in Oregon. In 1918 the first Garden Home Community Church was built by the members for $300 and formally dedicated at the Christmas service.  A bell was placed in the bell tower that called the neighboring families to worship. That very bell was rung this morning. It was placed in the bell structure here that is a memorial for Lyle Tate, a young man from the church who was killed in Vietnam.

Roy Floyd started delivering ice and groceries about 1922. Each family placed a card in their front window with the numbers 25, 50, or 75 which indicated how big a piece of ice they needed for their iceboxes.

The Depression hit Garden Home as all other areas. But the church persevered, often with part-time ministers. In 1935, they voted to officially become a Methodist Church. The original church constitution had authorized that the Church Board could decide from which denomination they would request a minister.

The 1940s brought an all-out war effort with the people using the new Garden Home Cannery Association to can their fruits and vegetables in an automated tin canning operation. Plum puddings prepared at the cannery were also sold at the wonderful Christmas Bazaars.

The Whitneys bought this cannery in the 1950s and it was later sold to Frank Comella and is now the Old Market Pub up at the corner.

The people were outgrowing the little church and the Sunday School rooms in the house next door. This property on S.W. 81st was purchased for $6,800 in 1958. The old church building was sold and moved up Oleson Road where it is now part of the West Hills Unitarian Fellowship.

This building was at least two years in the making, which according to trustee records “every small decision was made by committee.”

I would like to have those persons stand who attended the old church prior to the move here…..

The church people moved down to this site in 1961.  Mr. Reinhardt was the general contractor and the people of the church did as much of the work as possible. Mr. Reinhardt decreed that only the women were allowed to do the painting. He said that the men were too sloppy and he wanted it done right!

Many of us came in the 1970s or since. We had over 100 children here on many Saturdays for our Learning Centers. Everyone in the church was called on to teach classes in stamp collecting, wood working, leather tooling, sewing, crocheting, etc.  One of the most popular was learning how to make model airplanes and cars, which Ardella Couch and her son Eric supervised.  Glue everywhere but many of our children learned a new and wonderful hobby.

Everyone pitched in to teach Sunday School, which we called “SMILE” or Sunday Morning Imaginative Learning Experiences. In our unit on archeology and the roots of the Bible, we had a “dig” down the hill, salted with all manner of things, including the Monk’s dog dish. I hope you’ll look at those pictures in the back.

The parsonage burned very badly in November of 1975 but thankfully no one was injured as the Monks were attending the holiday program at the school.

The 1980s brought us into some wonderful musical experiences while Orville Nilsen was here. Major sanctuary remodeling and improvement occurred with Gary Ross’s enthusiasm. We note that the candlesticks and the vases on the altar that we have used for many years are in memory of Allen Shirley.

Yes, today as we recall our 80 years of history, we know we’ve had many wonderful years together, sharing our faith, our families, our tears, our work and our ministry together. We carry this history as a faithful people wherever we go.

I hope you’ll enjoy looking through the historical memorabilia that is displayed in the the back of the room.

*Background for historical comments from Church documents, “Garden Home, the way it was” edited by Virginia Mapes. “Traces of the Past,” edited by Jill MacWilliam and Virginia Mapes and printed by the Beaverton School District.  Both books now out of print.

1992-94; Sandra Daniels;        With heavy hearts, membership voted to close church due to declining membership and finances.