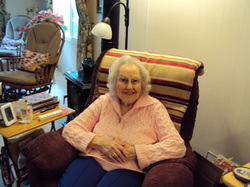 Vivian was born in 1918 and has lived in this area most of her life.

She spent her childhood in Beaverton and remembers the Allen family growing great fields of poppies on their property.  Her family lived across the street from the Patton family who ran a Funeral Parlor.  In 1929 her father purchased a farm in the Metzger area where she lived until her marriage to Ken Bosley in 1938.

Ken Bosley was two years old when he arrived in Oregon with his mother, Marjorie, in 1917.  Ken’s two older sisters, Jean and Dorothy, later joined the family.  After arriving in this area Marjorie Bosley married Bob Smith who owned a store near the train station near what is now the intersection of Garden Home Rd. and Multnomah Blvd.  At that time Garden Home had two stores, the Smith’s store, called the “red store”, and the store built by Chris Jager but at that time owned by the Upchurch family, referred to as the “white store.”

As a child Ken took his stepfather’s name and was known as Ken Smith while growing up.  He worked at the store doing various jobs. Vivian remembers that one of his jobs required him to pick up and deliver the mail to the train as it came through Garden Home.  To do this Ken would run along the side of the passing train and the man assigned to handle the mail would toss the mailbag to Ken.  Likewise, when Ken was delivering the mail to the train, he would run along the side of the mail car and toss the bag to the man on board.  Ken became an expert at this and Vivian recalls that as a result  “he could run like a deer!”

Ken was also responsible for the daily delivery of food.  In those days you would either call or go to the store in the morning and order what you needed.  The order was then boxed up and delivered to your home in the afternoon.  Vivian would sometimes ride along with him when he made his rounds and learned that while some of the folks the store delivered to were very pleasant, others got upset if the deliveries were a little later than then expected!

Ken and Vivian met while still in school.  While they did not attend the same school they got to know one another at some of the baseball games played between Metzger and Garden Home.  Local communities at this time had organized baseball teams and the games were a part of the social life for adults and children alike.

As a young man Ken began again to use his father’s name and when he and Vivian married in 1938 they became known as Mr. and Mrs. Ken Bosley. Together they raised 6 children: Sharon, Richard, Donald, Annette, Robert, and Vianna.

As newlyweds, the couple was asked by Ken’s mother to come and live in the attached living quarters that had been added onto the store.  Marjorie and Bob Smith had by this time built a small tavern next to the store and the tavern had recently been broken into and the Smiths were concerned someone might try to break into the store.

The tavern had been built sometime before Vivian and Ken married and had been built on a piece of property the Smiths owned that was located on a lot standing between their store and the Garden Home Methodist Community Church.  When word of the impending building got around some members of the community were upset that the tavern would be located so close to the church.  A petition was written up and circulated asking that the Smiths not build next to the church.  While some in the community signed the petition there were not enough signatures to prevent the tavern being built.  As it turned out the tavern had no real effect on Church attendance.

Just as the church was a major meeting place in the community, so was the tavern.  During the depression it became an important evening stop-off for many in Garden Home and the surrounding area.  In the back of the tavern was a One-Armed Bandit, a slot machine, which was very popular, and Vivian remembers men scuffling to see who would be next in line to bet against the machine.

In addition to having Ken and Vivian’s living area adjoined to the main level Burt and Kate Waller and their daughter Burtine lived in an apartment that occupied the top floor of the store. Burt Waller and Ken Bosley owned guns and Marjorie Smith felt that the two men would take care of anyone attempting to break into the store.  But for a young bride, the thought of Ken having to confront a robber in her home was disturbing. As time passed she was relieved that neither of the men ever had cause to use their weapons!

Life in their first home was cozy.  The furnishings of the living room consisted of several rattan chairs and a small table.  The kitchen was very small as was the tiny bedroom that consisted of a Murphy bed and a dresser.  When the bed was folded down for sleeping there wasn’t room to move around and you had to climb over the bed to get to the door.  The bathroom was in the store and you had to walk through the store to get to it.  Day or night!

About this time Burt Waller was hired by Aaron Frank.  Mr. Frank owned a large piece of property in Garden Home where he kept horses and his family had a summer home. The Wallers moved onto the Frank property and when their apartment became available, Vivian and Ken moved from their downstairs lodgings to the area above the store. They now had more living space and, more importantly, their own bathroom!

Young Gerry Frank and Burtine Waller were great friends and the two were often at the store or hanging out near the train station.  The trains passing through Garden Home were a great fascination for them and it didn’t take long for them to discover that the best place to watch the trains was from Ken and Vivian’s roof. The two youngsters would sometimes drop by to visit and Vivian enjoyed seeing them but when she would hear them tromping around on the roof she would go outside and yell for them to “get down!”  There was always the possibility they might fall. Sometimes when the two came into the store Marjorie or Vivian would ask them if they would like a snack. Gerry would always ask for a piece of bread or a banana. Vivian remembers because it amused her that he never asked for candy.

After their daughter Sharon was born the couple moved into a house around the corner on Jager Avenue. The Hyde family lived across the street from them.  Mr. Hyde was a mechanic who worked in Garden Home and the families became close friends.  Mr. Hyde was a wonderful pianist and his daughter had a lovely voice that she was shy of using in public but glad to share with company. Once a week the Bosleys, the Wallers and the Hydes would gather at the Hyde’s home to sing accompanied by Mr. Hyde on the piano. Not only were they entertaining themselves but also their neighbors who came to look forward to the musical evenings. Especially so on warm summer evening when windows were left open.

This being the Depression era no one had much money to spare on entertainment and so they created their own fun.  Aside from the musical evenings spent with the Hydes there were pinochle games with Kate and Burt Waller on Saturday nights.  Sometimes the couple would go to Multnomah to see a movie with money Ken had made by caddying at the golf course. Another source of spare change came from picking up lost golf balls and selling them back to the golf club.

Vivian and Ken did not stay long in Garden Home but have always lived in the surrounding areas of Raleigh Hills, Multnomah and Beaverton. Vivian now lives, independently, in her home in Tigard where I interviewed her.

Like Loading...
This entry was posted in Memoirs, People and tagged Bosley, Red Store, tavern. Bookmark the permalink.